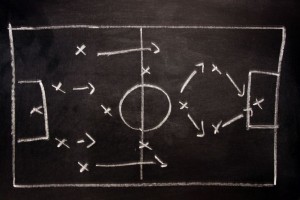 Since the latest signings were made during the summer, fans alike wondered what system Sir Alex Ferguson would play. Shinji Kagawa and Robin van Persie didn’t only promise selection headaches but gave the manager opportunities to try different tactics.

Manchester United as a football club is associated with fast wing play and scoring goals. We have been fortunate enough to have witnessed the creative genius of Paul Scholes for near enough 20 years. His technical ability has served the club extremely well. Scholes’ ability to find virtually anyone on the pitch has allowed United to dictate games and win some hard fought ties, as well as stroll through the easier victories. Unfortunately his career is nearing an end. So this poses the question, is United’s regimented 4-4-2 outdated in the modern game? With the likes of Spain playing a 4-6-0 is the art of a great striker in a team being the said ‘goal machine’ a thing of the past. I definitely wouldn’t go so far as to say that. But a change is needed to cope in the modern game. Teams now pack the midfield, including many of United’s main rivals, which evidently leaves us overrun centrally more often than not. If you look at our outing against Tottenham Hotspur; Dembele, Sandro and Dempsey completely bossed the middle of the park, not for being technically better, but younger, fitter, and fantastic ball winners.

Manchester United’s problem is basically two-fold for me. There’s an awful lot of quantity but not quality, if you look at the amount of central-midfielders that United have on their books: Carrick, Scholes, Cleverley, Anderson, Fletcher, Giggs arguably Kagawa and Rooney, not to mention the youngsters coming through, the likes of Tunnicliffe, Powell and Petrucci surely all wanting to make their mark in the first team, you can fully understand why Sir Alex may feel no additions are necessary. However our physical stature in midfield is far from impressive. I would suggest that a fix to this would be to go three in midfield, for me our strongest combination with this would be a team consisting of De Gea; Rafael, Ferdinand, Vidic, Evra; Carrick, Rooney, Cleverley; Valencia, Van Persie, Kagawa.

I’d go for this line-up personally because it makes us quick. Kagawa played wide regularly for Dortmund, so he wouldn’t be a winger but what you would call inside left, meaning Evra would have to provide the width for the left side. Given his recent form that would prove difficult, defensively he’s been nothing short of woeful, and in an attacking sense his crossing and shooting ability leaves quite a lot to be desired. He’s still a good full-back but a regular starter? Not for me anymore, not until he gets a rest. That leaves us with Buttner, who on his debut was impressive in the sense that he scored, but lets be honest, it was quite lucky. I’m nowhere near sold on the guy but hope to be proved wrong.

This 4-3-3 could work for me, but will it be tested? Only one man can test this theory. Another formation recently attempted was a peculiar one, a sort of 4-1-2-1-2 but strangely, this team had no wingers and it solely relied on the full-backs for width. But it worked! Slightly similar to the Italian formation at Euro 2012, it may be used again and it may work, but it was used when United were missing their usual key aspect of wingers Valencia and Young, who were both out through injury. Nani was missing for a reason stranger than fiction, you’d have to imagine that this formation would be used when there’s no other alternatives.

A suggestion I often see for a 4-3-2-1. This is quite an exciting formation with lots of interchanging and quick passing. However it can be risky as United wouldn’t have to view a recognised anchor, it’s a position that Carrick has to adopt but he’s not a natural tackler so to speak, so this can often leave the team exposed something that has cost us dearly recently.

For me I feel Rooney is best used in the gap between midfield and the striker which will disadvantage Kagawa if he’s playing in a wider position, but the players will always be switching around so he will more likely end up playing more centrally than the team-sheet would suggest. So for me the 4-3-3 would suit United best for the modern game.