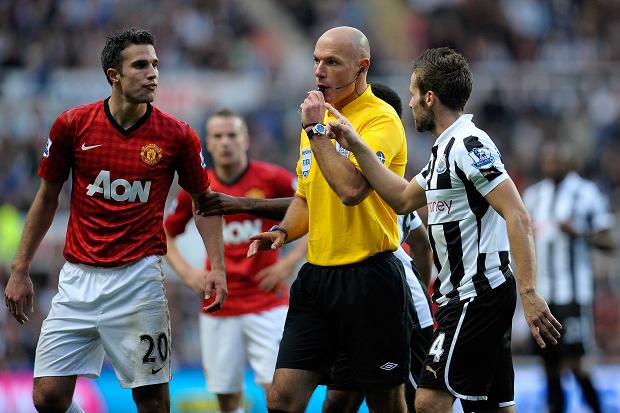 Robin van Persie was harshly criticised by Alan Pardew after yesterday’s 3-0 win over Newcastle at St. James’ Park. The Manchester United striker’s collision with Yohan Cabaye was described as “unsavoury” by the former West Ham loudmouth.

The Football Association have opted not to charge the Dutch international with a disciplinary offence. Cheik Tiote also got away with his stamp on Tom Cleverley in the same fixture.

Robin van Persie appeared to catch Yohan Cabaye with an elbow in Sunday’s game, and Newcastle boss Alan Pardew accused him of deliberately making contact with his opponent because there was a bit of history between the pair since last season.

Despite having a word with the former Arsenal striker after the incident, Howard Webb admitted he didn’t see anything at the time. However, having watched replays after the game, the official claimed he would not have deemed it worthy of a sending off, putting accusations to bed.

As for Tiote stamping on Cleverley… Webb dealt with that immediately, so there was no need for it to be taken further by the FA.