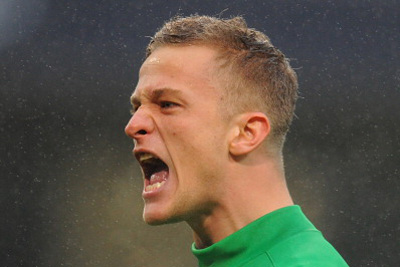 Having just started our third month of the season, you would be forgiven for thinking that by now Sir Alex Ferguson would have a clear idea of what our best XI is going forward to try and reclaim our title from the noisy neighbours. Thus far, we are still unsure of what is best going forward in a number of critical areas. For instance the left-back conundrum, Patrice Evra’s clear dip in form has not been something that’s just happened overnight, when Alex Buttner gets match fitness, who will be number 1 in Ferguson’s eyes will become clearer. There are still unresolved issues emanating from our midfield. Life after Paul Scholes seems too hard to stomach, how will we be able to say goodbye for a second time? However, undoubtedly the position that has polarised United opinion the most so far this season has been who deserves to wear the goalkeeper jersey. We are in October, and not even Ferguson knows who is the better bet going forward.

Filling the big gloves of Edwin van Der Sar, the greatest goalkeeper we had since Schmeichel, was certainly going to be an unenviable task for even the most experienced of stoppers. Once we knew David de Gea was the heir apparent to Van der Sar, the presssure was brewing from typical United critics and journalists from day 1. De Gea had a rocky start to his United career, he conceded from very long range strike from Edin Dzeko in the Community Shield, and in the match that followed, our opening Premier League fixture against West Brom, he let a very tame effort from Shane Long squirm underneath his body. Thankfully those errors did not prove to be costly at the time. However, from that West Brom match, opponents saw a potential weakness in Dave’s not-so imposing frame and a vulnerability to the high ball and physicality of the English game. The microscope was fully focusing in on De Gea and nothing epitomised this weakness more than the chilling 2-3 home defeat to Blackburn. Blackburn were a notoriously physical side put kindly. Paul Robinson would just lump the ball up to Yakubu, Samba, Hanley etc, De Gea flapped at a corner and Hanley scored to condemn us to an embarrassing home defeat. Given the margins of last season and how it ended, a draw against Blackburn would have seen us champions.

David de Gea’s confidence at that point was definitely at it’s nadir and it was costing us. It was probably not just the weakness versus the high ball that initially hindered David’s development: As well as trying to adapt to the new cultures, there was the price-tag, for Sir Alex to entrust so much faith in a young keeper and splash out nearly £20 million spoke volumes of Ferguson’s confidence in the man and that he is the long-term answer to our previous great Dutchman, but with that tag comes a pressure to hit the ground running and perform at optimum level consistently. David didn’t do that enough in the first half of last campaign. Subsequently, De Gea was axed from the team for a period and Anders Lindegaard was pressed into action.

There is no doubting Ferguson believes in Anders Lindegaard. He was a relatively obscure signing, from Aalesund in Norway. United great Peter Schmeichel initially had his doubts over the Dane, saying that he was not ready for the Premier League and arguably not good enough for United. Lindegaard responded in a typically confident yet brash manner, in one of the more legendary United quotes, saying he had not come to United ‘to pick his nose’. So why does Ferguson trust Lindegaard at this moment in time, in the league games more so than De Gea? It’s a question that has reared it’s head on various Social Media sites over the past few weeks. Lindegaard stands at an impressive 6’4″ and therefore gives off a more commanding posture than the Spaniard. He may not be as talented as Dave, but gives that added assurance and solidity, especially if teams try and expose our dislike for the long ball. Lindegaard’s spell in the team last year was only short-lived though, a freak training injury meant his season was prematurely ended and the Spaniard was back in the firing line.

De Gea’s United career finally took off in the second half of the season, when it really mattered too. The Spaniard went on to keep 9 clean sheets in the final 18 matches and the pinnacle came at Stamford Bridge. Chelsea had surged into a 3-0 lead and it seemed like curtains for United, but a stunning second half turnaround meant United had typically done what we do best and make the impossible possible. Late on, Chelsea pressed for the winner and Juan Mata’s free-kick look destined for the top corner, but De Gea miraculously clawed it out in what was arguably the save of the season and the start to redemption. De Gea ended the season with a save percentage of 78%, the highest of any goalkeeper in the Premier League last season and the Spaniard had vindicated why United decided to fork out the sum they did for his services.

There can be no doubting David de Gea’s ability when it comes to shot-stopping. He has great agility and reflexes as demonstrated with that Mata save. The only way De Gea will eradicate the so-called weakness against the high ball will be with regular examinations against that bombardment. In our most recent Champions League encounter against Romanians Cluj and in the Carling Cup against Newcastle, De Gea demonstrated that he is improving in this area. At Carrington, De Gea has a particular and tailor-made strengthening and conditioning programme engineered to see him bulk up and possess more of a commanding presence, much like what Lindegaard has. He isn’t that frail young, timid Spaniard who first arrived here anymore, you can see the strides and overall development there.

It is unquestionable that De Gea could potentially be a United goalkeeper for as long as he wants to be. Some people forget he is only 21. Goalkeepers do not even hit prime form or their peak years until early 30s, and if De Gea is so talented now, he will no doubt eventually displace Iker Casillas as Spain’s long-term number 1, Casillas has even said so himself. However, I can understand why Sir Alex has chosen Lindegaard lately. Lindegaard is a solid keeper and is a good alternative to have alongside De Gea. I cannot see Lindegaard as being number 1 for much longer though, there is only so long that you can keep a £20M player on the bench before unrest and rustiness sets in. It has been interesting that De Gea has started both our Champions League matches and in the Carling Cup, but also it’s been disappointing to see him back on the bench when it comes to league matters, regardless of how well he has done. One little error against Fulham, which ultimately didn’t prove to be costly, has been the only blot so far on what has been a very encouraging start to his season. It’s like that phrase, ‘don’t kick a man while he’s down’, well I’d say ‘don’t kick a man when he’s up’ either. De Gea single-handedly kept us in the match against Everton, he made great save after great save and looked like a world-beater, he was left helpless by Fellaini’s header, but that scoreline flattered us, mainly thanks to our Spaniard’s excellent evening. He was outstanding in both European games, and the save at the death to deny Rafael Bastos of Cluj was simply sensational, and got us the three points we needed after the Tottenham blow at the weekend.

Anders Lindegaard has not put a foot wrong since joining United, I like many just think it’s time to put De Gea back in the firing line, he needs to learn the ropes now, so he can go on the road to greatness. We should be thankful we have such a good number 2 in Anders and equally grateful that our number 1 is coming good at the young age of 21, what will be like at 31?