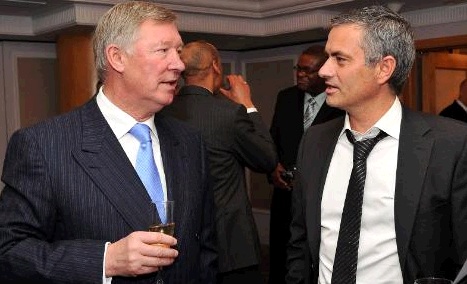 Real Madrid manager Jose Mourinho plans to return to the Premier League after his stint in Spain. Although, he hopes that Sir Alex Ferguson will be in charge at Manchester United when he does so.

Since leaving the Premier League Mourinho has been touted as a likely successor to Ferguson, but the Madrid manager said that for him the “perfect scenario” would be that the man he calls “Boss” is still at Old Trafford.

Mourinho is a character whom is never short of mind games, which is why I’m hesitant to believe what he told CNN: “No, the perfect scenario when I go there is to coach, because I think football will lose a lot when he stops and there are not young managers and old managers. For me, he’s the boss. I call him the boss because he’s the boss of the coaches and I hope that when I go back to English football he still manages Man United.”

The former Chelsea manager refused to contemplate taking over at City instead: “I don’t think about that, especially because I have a four-year contract with Real. I signed it and when I signed it I signed it because I wanted to be in Real Madrid in this period of my career and I don’t think in another club. I just say openly that for many reasons after this project, the next step will be England for many reasons, but when? I don’t know, I don’t have an idea and I am so happy to be in this moment as manager of the best club in the world.”

However, the interesting thing about that is Mourinho has a clause in his current contract that gives him permission to talk to Manchester United if and when the club comes calling. If it happens to be another club, they will have to pay a huge compensation fee.

Opinion on Mourinho getting the big seat at Manchester United

Negatives would come along with the positives. Mourinho’s ego suggests he means more than the club in almost every circumstance. In his first press conference in England, as Chelsea manager, he told the media that he was ‘the special one’. I immediately laughed and thought ‘who does this smug prick think he is?’ People also used to call the team ‘Jose’s Chelsea’. Can you imagine hearing that being said about United?

Mourinho, in the past, has made his feelings heard about certain presidents at Real Madrid. This type of behavior causes unsettlement at a club and could influence players to take either sides in the argument. Ferguson has opted to ignore the damage Malcolm Glazer and his flock are causing the club, so would the American family fancy such a rebellious replacement? Not a chance unless Mourinho promised to change his ways.

Sticking to the business front, Mourinho has always been one that enjoyed a few signings. At Chelsea he had the backing of Roman Abramovich. However at United, he’d have a different kettle of fish with the Glazers. I can’t see him using excuses like Ferguson saying “there’s no value in the market.” It all sounds very Arsenal like.

This brings up the question about giving the youth a chance. Sir Matt Busby didn’t only make a team. He made a club. The main part of his philosophy was to show faith in the youngsters that wore the shirt and it’s something our supporters are extremely proud of. Sir Alex Ferguson took this on the chin and did the similar forming that wonderful class of ’92.

Mourinho, on the other hand, hasn’t ever really concentrated on the youth at any club he managed. The argument to that is the fact he doesn’t settle anywhere easily, spending an average of 2-years at each club (Benfica, Uniao de Leiria, Porto, Chelsea, Milan and currently Madrid). Whoever takes the biggest job in football will be expected to be able to settle for years and experiment with the youngsters.

Taking over from Ferguson will be, by far, the biggest job in football. Mourinho has the winning mentality but certain attributes need to be matured.