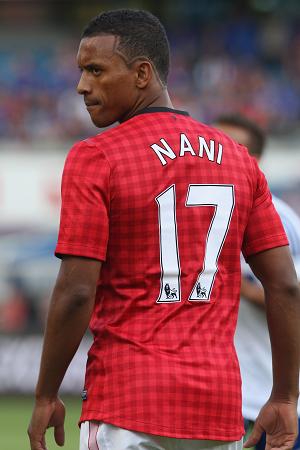 No player, besides Patrice Evra, currently is getting more flack than our mercurial number 17 from Portugal. Put kindly, Nani’s start to the season has been indifferent. Nani, for the most part, impressed during Euro 2012 and was expected to kick on from the scintillating form he had finally discovered over the past two years. There is an interesting adage that reads like this, ‘if you can’t excel with talent; triumph with effort’. Thus far, our Portuguese Michael Jackson has not even gone that far. So, what has happened to Luis Carlos Almeida da Cunha?

Many Reds have already been tipped over the edge and said ‘enough is enough, Fergie should cash in now’, this claim may be a bit premature, especially given Nani’s form on the whole over the past couple of seasons. As a rule of thumb, a fully fit, confident and motivated Nani will contribute double figures in both the goals and assists columns. In the ever evolving demands and styles of the game, you would more often than not want a winger with the ability to provide and score, as well as the box of tricks and pyrotechnics that Nani possesses. If you cast your mind back to last season and in particular our 3-1 Premier League victory over Chelsea (the one where that ex-dipper, pretty boy missed an open goal) Nani collected a diagonal pass from Jonny Evans and jinked his way past 2 Chelsea defenders before unleashing an unstoppable blockbuster into the top corner. Admittedly, people want to see Nani do this every week, but he is the only player in the current United setup who could possibly score a similar goal.

Unfortunately, such is reality, we have not been able to drool over his performances this season. As you may have seen in my previous blog about Nani, I have been fighting Nani’s fires for him, waxing lyrical about his quality and how it would be a disastrous prospect to lose him. Sadly, this year I can at least empathise with those detractors. Naturally, Nani is a player who will infuriate: he is a player who relies on instinct and raw natural talent, a complete caveat to our Ecuadorian flyer Antonio Valencia, whose sheer effort and desire makes up for being a naturally inferior talent in comparison to Nani.

The start to this season for Nani could be described in a few ways – disappointing, comical, lacklustre. Disappointing in the sense that we expected and still expect to see the real Nani. The one that glides past defenders, brings out his box of tricks and scores sublime goals. If Nani’s overall performances were based on two halves, this would be the first half. The second half of the ‘Nani show’ involves sometimes wayward shooting, amateur dramatics, upsetting team mates and a distinct lack of will to track back and help United defensively, not just his bread and butter. Therein is precisely why the fans get peeved with Nani and why he has suddenly become the United scapegoat and whipping boy rolled into one.

Moving onto the comical aspect of this season. After a probable 7 out of 10 performance at Euro 2012, United fans had high hopes that Nani would continue that good swansong to his summer by churning out high-class performances week in week out for United this season. Currently, we could barely be further away from his ideal. Frankly, Nani was woeful in our tricky opening fixture against Everton. The dummy was spat out from as early as the 2nd minute when he incorrectly thought he was onside and berated the linesman. Minutes later he made a rash tackle on one of this summer’s United targets Leighton Baines. Baines made Nani look like a Sunday league player and was eventually substituted. One can only suspect that after that debacle, Nani’s scalp might have been burnt by the famous Ferguson hairdryer, as he was dropped for our opening League match against Fulham, not even making the bench. He returned off the bench against Southampton, and created the chance to win a penalty which RVP fluffed embarrassingly, but tellingly provided the corner from which RVP redeemed himself.

In the days that followed our away success, media reports were emanating that Russian moneybags Zenit Saint-Petersburg were chasing our winger, following reports that contract talks with United had hit an impasse. The comedy lies in the fact that apparently Nani wasn’t entirely open to moving and thus threw a ridiculous wage demand at his admirers. He was then shocked to discover that Zenit were actually willing to meet Nani’s exorbitant requirements, Zenit already showed they had no boundaries with their eye-watering acquisitions of Hulk and Axel Witsel. Nani then apparently switched off his mobile and told his agent and close friends to not tell Zenit of his whereabouts.

No-one could really argue with any conviction that Nani has in effect been a passenger when selected this season. He has without doubt shown us the bad side rather than the good, in United most recent matches he was ineffective against Liverpool and taken out of the firing line at half-time, and after a typical mixed bag display against Galatasary, his penalty effort was abysmal, what happened to putting your laces through it? Nani can undoubtedly produce something out of the ordinary given the moment, however he is stuck in the ordinary at the best of times at the minute. He needs to get out of this rut and prove a point.

It is a shame that we would be willing to entertain offers for Nani, given how much it would take to find a suitable replacement who could score and create as much as Nani has over the past couple of years. Are there that many wingers who can do this? If the real Nani turned up on a weekly basis, he would definitely be one of our most valuable assets. People have correctly waxed lyrical over top young prospects such as Iker Muniain and Nico Gaitan, but is there any guarantee they could seamlessly adapt to the rough and tumble of Premier League life, or come at a decent price? I have my doubts in this regard.

Sir Alex Ferguson is a firm believer in being patient with most players, Nani is certainly testing this patience currently. Fergsuon’s relationship with Nani has not always been entirely dandy, sometimes Nani’s self-inflicted petulance has turned things frosty. This is not the first time that Nani is gambling with his long-term future at United. In 2009, Nani pulled no punches in an interview in his homeland: “He can go from complimenting you to just plain trashing you in a matter of minutes. Has it happened to me? Hell, yes! He’ll say ‘Nani, how could you miss this or this’?” Normally, Sir Alex has not been afraid to ditch those who spoke out of turn, Stam, Keane, Beckham, Van Nistelrooy will testify. Nani would not have been the most famous name to be added to that list, but Ferguson must have seen something to give him a reprieve.

Nani has said for a long time now that he would be more than happy to stay at United during his peak years. It would not be callous to suggest that this contract saga is a direct correlation to Nani’s underwhelming start to the season. Could we cope minus Nani, with another mercurial winger in Ashley Young, a somewhat over-reliance on the right side on Antonio Valencia, and from time to time Shinji Kagawa or Danny Welbeck on the wing, not their ideal position?

Probably not, which is why the real Nani needs to stand up and deliver, prove his point and get tied down long-term with United. Nani could possibly be classed in the world-class bracket when on form, I’m sure deep down not many people actually want Nani to be sold, they just want to see the real Nani.

2 responses to “The Strange Case of Nani’s Missing Form”