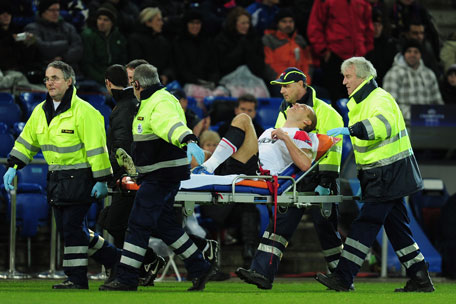 The injuries are coming in thick and fast again this season with another blow after skipper Nemanja Vidic was ruled out for eight weeks. The Serb underwent surgery on the same knee (right) which caused problems last season, keeping him on the sideline for five months after rupturing his cruciate in the Champions League defeat to Basle.

However after examination it was made clear that we had a greater problem on our hands, prompting a decision to send Vidic for an operation, which has now been completed. The question a lot of Reds want answered is how didn’t the medical staff see this problem occuring before giving Ferguson the go-ahead to put him back into United’s starting eleven?

“Nemanja Vidic has had a meniscus operation on his right knee and will be out for around eight weeks,” said a club spokesman. “Sir Alex, as a precautionary measure, rested Vidic at the weekend, after he complained of tightness in his knee, however, further medical investigation revealed the underlying problem. The central defender was operated on this week and will be sidelined for about eight weeks.”

There has been a few questions asked of our back four earlier this season. Michael Carrick was made play as a centre half for a few games which resulted in the England international picking up unnecessary criticism. Unnecessary because we all know he’s a central midfielder. Either way, United begin another cup run at Old Trafford tomorrow night with Ferguson expected to make a number of changes to his squad for Newcastle in the League Cup.

When asked about Wayne Rooney’s recovery, Ferguson vaguely answered “next week” as a possibility for his return from a gashed thigh which he picked up in Manchester United’s 3-2 win over Fulham. The striker returned to training last week and the club are satisfied with his recovery, therefore, a place on the bench tomorrow cannot entirely be ruled out. Then again with games against Tottenham, Cluj and a Premier League trip to the Sports Direct Stadium, Ferguson will want Rooney ready for action.

It has been reported that we will see new signing Angelo Henriquez, perviously described as the Chilean prodigy on SN, feature for the first time since joining from Universidad de Chile for an undisclosed fee. Delays in finalising Henriquez’s international clearance from Chile meant that Ferguson was unwilling to register the teenager in his Champions League squad.

Nick Powell, Alexander Buttner and Michael Keane are others who can expect to feature. However, we remain unsure whether Darren Fletcher is ready to make a start, so we will have to wait and see. Hopefully his development continues because there wasn’t many that expected him to make a return.