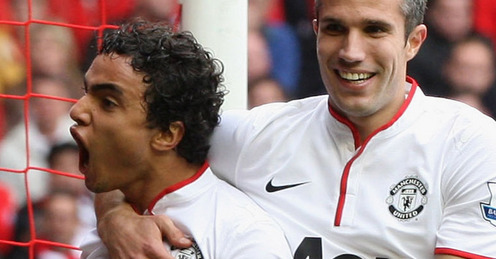 Rafael da Silva’s equaliser in Manchester United’s 2-1 win over Liverpool will not only live long in the memories for supporters, but the Brazilian right back also. Having only scored 4 goals for the club since joining from Fluminense’s academy in 2008, Rafael believes his left-footed strike against the scousers was his best.

Manchester United didn’t come away from Anfield with three points since 2007 before yesterday. Although, we struggled again with a typically poor performance at Merseyside. Even when Liverpool went down to ten men we didn’t look better than them, it just seemed to even things out giving us more room in midfield to roam. Steven Gerrard’s opener came just after the interval before Paul Scholes could grab the game up by the neck and help United keep possession.

Shortly after Liverpool’s opener, Rafael curled home a superb equaliser. Gary Neville looked on in the Sky Sports studio wishing he had done something similar against the scousers in his career. Either way, it had Brendan Rodgers’ men rattled and created the platform from which Robin van Persie put Manchester United ahead.

“It was an important time to get the goal,” said Rafael. “It was a good moment to get it because it was so quickly after they scored. If we hadn’t scored then we might have got a little bit nervous. It’s definitely the best goal I’ve scored for United. I have scored four goals for United now, one with my head and two with my left foot. Maybe I am better with the left.”