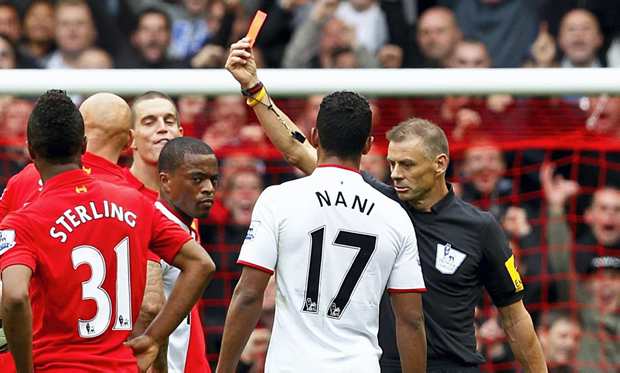 Twitter users were appalled by comments made by two Liverpool supporters that were aimed at Mark Halsey, who sent Jonjo Shelvey off for planting a set of studs into Jonny Evans with a two-footed tackle during Sunday’s North West derby at Anfield. The abuse has been condemned as “beneath contempt” by the match officials’ union Prospect.

Halsey became the victim of abuse because of the way he handled the fixture between Liverpool and Manchester. It’s not often United get decisions at Anfield, so that’s what has upset them most. I mean, how dare a referee give a penalty the other way when Liverpool are at home…

The national secretary of Prospect, Alan Leighton, issued a statement to Press Association Sport:  “Prospect wholeheartedly condemns the unacceptable abuse aimed at Mark Halsey on Twitter. The comments made by a very small minority will be seen as beneath contempt by all decent people.

“The main concern now is for Mark and his family, who are receiving the support of his employer, PGMOL (Professional Game Match Officials Limited). Prospect will also provide any assistance as required.”

The vast majority of Liverpool fans were outraged by the sending off of Jonjo Shelvey and felt Robin van Persie should have received a similar punishment despite winning the ball in his challenge. Manchester United’s penalty in the last 10 minutes was another one listed as being controversial after RvP put the Reds ahead.

A tweet posted from an account named @johnwareing1 read: “I hope Mark Halsey gets cancer again and dies” while another from @lfcjohn259 read: “Mark Halsey should’ve died of cancer.” Both are inexcusable and were rightly met with outrage from the general public.

Halsey was diagnosed with throat cancer in 2009 but returned to refereeing in March 2010. I personally thought he did a good job yesterday. For Shelvey’s sending off he could have gave both players, including Evans, a yellow card but the only other option was to send the Liverpool midfielder off. He hasn’t got much to complain but he’s foolishly trying to nonetheless.

The Liverpool fans that have a problem with yesterday’s red card might remember how a certain Jamie Carragher split Nani’s leg in 2011 and got away with doing so.