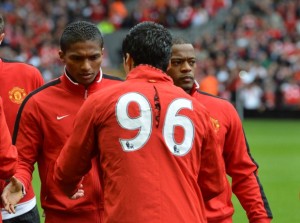 Patrice Evra says his handshake with Luis Suarez before the North West derby on Sunday was crucial on a day where the key theme was respect. However, the Manchester United left back was booed every time he touched the ball because the Liverpool striker racially abused him last year.

Both clubs share a fierce rivalry but there was more respect shown yesterday than usual. As a mark of respect for those that died during the Hillsborough disaster, Sir Bobby Charlton and Ian Rush posed for photographs holding 96 Red roses before kick off. Sky Sports also interviewed both managers together for their pre-match chatter which, in fairness, looked forced and awkward when they felt it showed a sign of unity.

Suarez and Evra have been involved in a long-standing racism row since October 2011. However when the pair last met in February, there was uproar because Suarez refused to shake the left back’s hand. That set up a week’s work for the media who were already busy shit stirring with misleading information regarding United fans chanting “always the victim, it’s never their fault” during the 4-0 win over Wigan.

Speaking after United’s 2-1 win over Liverpool, Evra said that he had to respect the day so he put any quarrel with Suarez aside. In the interview which appeared on MUTV he was respectful towards Liverpool and the people that lost their lives at Hillsborough.

“It was not an easy game,” Evra stressed. “There was a lot of tension and emotion beforehand and, in the end, we get the three points. It’s all we talk about – winning – because we have done our job and well done to everyone. I think the most important word today was respect because it was a game between two big clubs that have both had big tragedies. That’s why, although a lot of people were talking about me shaking hands with Suarez, the story of the clubs is bigger than that. It’s why I think if I didn’t shake his hand, I didn’t respect the story of both clubs. In the end, this time, he shook my hand and it was more important to respect the families who lost a lot of people.”