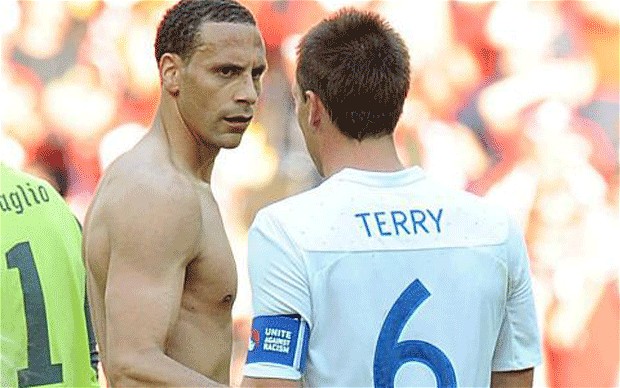 Just a couple of hours after John Terry announced his retirement from international football people wondered whether Rio Ferdinand should accept or reject a potential recall after his Euro 2012 snub. The Chelsea captain issued a statement on Sunday night, claiming the FA’s decision to pursue a case against him after being cleared in court of racially abusing Rio’s brother made his position in the national team untenable.

Terry’s decision to retire isn’t exactly surprising. We all know how much of an odious coward he is, especially this time releasing a statement hours before his hearing on racism. He has jumped before he got kicked out. Captain, leader…liar, coward.

“I am announcing my retirement from international football,” said a statement issued by Terry. “I would like to thank the England managers who have selected me for my 78 caps.

“I have had great pleasure in sharing that honour with all the players that I’ve played with. I would like to thank them, the fans and my family for their support and encouragement during my international career.

“Representing and captaining my country is what I dreamed of as a boy and it has been a truly great honour. I have always given my all and it breaks my heart to make this decision. I want to wish Roy and the team every success for the future.

“I am making this statement in advance of the hearing of the FA disciplinary charge because I feel the FA, in pursuing charges against me where I have already been cleared in a court of law, have made my position with the national team untenable.

“I now look forward to playing for Chelsea FC, and challenging for domestic and European honours, and I want to thank the fans and the club for their continued support.”

Depending on how his hearing goes, Terry could face a lengthy ban by the FA for using racist language during a Premier League fixture for Chelsea against QPR on October 23 last year. Terry has categorically denied racially abusing Anton despite conceding he did use a racial slur but insists he said “Oi! Anton! Do you think I called you a fucking black cunt?” Hmm.

However, Roy Hodgson feels the Chelsea man still has a role to play for England. The same man that put his decision to snub Rio Ferdinand for Euro 2012 down to footballing reasons when really it was down to the race row between Terry and Anton. The England manager came up with some real shoddy excuses, and made matters worse for himself.

The dealing of the situation was poor and Ferdinand’s past with England was summed up brilliantly by United Rant on Twitter: “Has a player ever been shafted by Eng/FA more often than Rio over the years? Grab ankles, bend over, no lube.”

Well, has there been? Should Rio accept a call up from Hodgson in the near future? Perhaps the former Liverpool manager still believes the likes of Martin Kelly offer more to the squad despite the impressive start Ferdinand has had to the season.

One of the biggest headlines concerning Rio Ferdinand was his ban for failing to show up for a drugs test in September 2003. That resulted in the FA Disciplinary Committee imposing an eight month ban from January 2004 at club and international level and a £50,000 fine. If that was bad, Manchester City’s Christian Negouai also failed to attend a drugs test in 2003 and received no ban. Where is the balance?

Channel 4′s Dispatches broadcasted in September 2011 gave United fans more reasons to feel aggrieved, with 240 drugs tests being abandoned between April 2007 and August 2010 after players failed to attend. More than 20 of these tests occurred at Premier League clubs, including four failed tests at City and Everton, one at Liverpool and five at Fulham. The treatment Rio has got from not only England, but The FA, has been ridiculous. No wonder Ferguson previously claimed they treat us like “shit”.

There comes a time in a player’s career that when they reach a certain age they have to set their priorities straight. Rio Ferdinand is 33-years-old and has had to change his style of playing having lost yards of pace. England haven’t been exactly welcoming towards him in recent months or years either, so perhaps he should tell Hodgson where to go and hang up the international boots. Set sights on winning more with Manchester United.