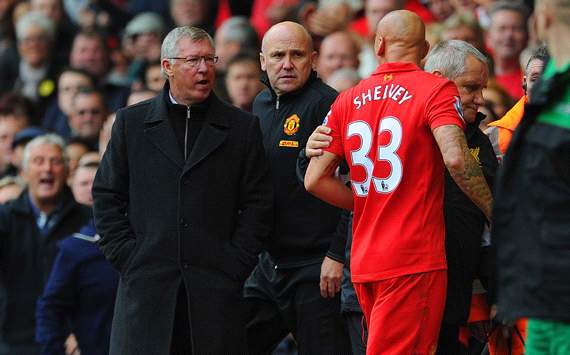 After receiving a red card for a dangerous tackle on Jonny Evans, Jonjo Shelvey made matters worse when he gave Sir Alex Ferguson an ear-full before entering the tunnel. Instead of accepting responsibility for his own actions, i.e raising both feet off the ground and planting a set of studs into a member of the opposition, the Liverpool midfielder pointed blame at the Manchester United manager.

The 20-year-old shouted “that was you! You did that!” towards Ferguson before being assisted to the dressing room. If you think that was embarrassing he also took his anger to Twitter but deleted the tweets shortly after. He tweeted: “I have also apologised to Sir Alex, just where I come from people don’t grass people up to get someone sent off.” Thankfully, Balls.ie took a screenshot before the Liverpool midfielder realised how ridiculous he sounded.

Talking to MUTV after the game, Ferguson said: “I think it’s a clear sending off, I’ve absolutely no doubts about it,” Ferguson told MUTV. “I’ve seen the replay. It was reckless. Jonny Evans, who has dived in, went for the ball and got the ball, no question about that, but Shelvey was nowhere near getting the ball and could have given Jonny Evans a real bad injury. He was very lucky, actually.

“He [Shelvey] came and blamed me. Why not? Why look at himself in the mirror? Just blame someone else. I think the boy’s young and when he looks at it again he’ll realise the stupidity of it. He may apologise, he may not.”

Ferguson admitted his side didn’t play well again at Anfield which has been the case for the last four years. He expessed his delight for what some will call an undeserved victory.

“In the last four years here we haven’t played well,” Ferguson said. “Today at least we’ve got a result. Hopefully that’s a turning point for us because if you look back over the years we always did really well here.

“I think it was about five, six, seven years in a row we did exceptionally well, but it goes in cycles anyway. Before we had that run they had a period in the late ’80s of getting results against us, so it’s maybe our turn to start.

“I thought we were poor, to be honest with you. I think the last four years we’ve allowed the crowd to get to us a little bit – they give fantastic support to their team and they really dominated the first half.

“Second half they got a great start. With ten men I thought that was a great boost to them because it was something to hold on to, but credit to the players in that respect; the second half we played much, much better, but we were against ten men. I think Scholes, Carrick and Giggs’ experience got us through.”

Despite the controversy surrounding Jonjo’s childish outburst, Liverpool thanked Manchester United for the respect shown towards the 96 that died during the Hillsborough disaster. I was also pleased with the Reds that travelled to Merseyside. The vast majority were well behaved as expected.