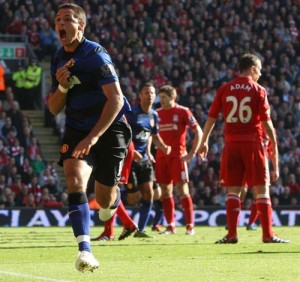 Following an easy win over Wigan last Saturday, Manchester United hope to continue their scoring ways on a trip to Anfield when Liverpool play their first home fixture since the Hillsborough files were revealed.

After an unusually shaky start to the Premier League season, United are slowly building in confidence and will be looking to build upon their recent run of form with their toughest test of the season yet at Liverpool this weekend. Although the Reds are yet to really get going, the goals have continued to flow and with the first clean sheet of the season kept against Wigan last weekend, they’ll be confident of picking up more points.

It wouldn’t be unfair to suggest Liverpool are no longer a major competitor on the pitch in terms of footballing ability and quality, but the expectedly hostile atmosphere and negative tactics is sure to make the game one of the toughest of the season so far. The atmosphere at any United vs Liverpool game is normally tantalising, but with the Luis Suarez racism saga still ongoing and the recent reports of disrespectful chanting at Old Trafford, the atmosphere is sure to be even hotter than usual.

There’s no denying the effect an atmosphere around the ground can have, and with Liverpool playing their first home game since they were officially cleared of any blame over the Hillsborough tragedy, they’ll be even keener than usual to get one over us. If we went out and took the game to them then I’d have no doubts about our ability to win the game, but time and time again in recent years we’ve seen Sir Alex setup defensively for trips to Anfield and as a result we’ve lost more points than we should’ve done. In fact the last time United won at Anfield in the league was way back in 2007 when Carlos Tevez got the winner. Hopefully this time we’ll go out and attack them, instead of just sitting back and letting them at us.

After all, Liverpool’s worst start to the season since 1927 suggests they really are there for the taking. They’re clearly fragile defensively, having conceded 8 goals in just 4 games, letting West Brom stick 3 past them on the opening game of the season – while United, largely down to Robin van Persie, have scored as many as Liverpool have conceded. Upfront Liverpool are still having problems, having only scored 3 goals so far and to the enjoyment of United fans, Luis Suarez’s ability to miss easy opportunities is becoming an increasingly often affair.

The facts ahead of the match certainly make mixed reading for United fans. Robin van Persie has seemingly bedded into the team well and a goal against Liverpool would surely increase his popularity even more; making it goods news for Reds that the Dutchman has scored 4 goals in his last 5 matches against Liverpool. On another note, though, Liverpool are unbeaten in all 5 of our most recent matches against them; a fact that goes hand-in-hand with the realisation that United have had 3 sending offs at Anfield in 5 years.

However, regardless of the poor form Liverpool have shown and the facts suggesting we could well be in for a Dutch treat, we’ve been far from perfect this season and it’s not going to be easy to address our recent poor form at Anfield. Matches against Liverpool are always different and it’s one of the few games of the season where form counts for nothing. It’s good to know that, aside from Rooney, we’re taking a nearly full-strength first eleven and it’s just down to who gets the tactics right on the day.

In regards to a score prediction, it’s a tough one. If we turn up and play the right system, using our wingers effectively against their reasonably weak defenders and pressing them high up the pitch, then I truly think our quality could see us win 2 or 3 nil. However, the added incentive from Liverpool to play well in their biggest game of the season, and the pessimistic mood I’m in over our undoubtedly negative tactics, makes me think a 1-1 all draw is more likely.