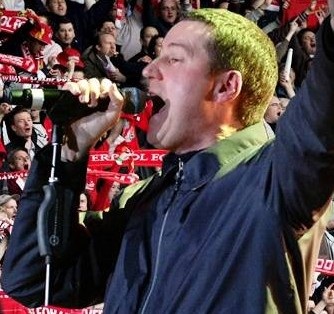 Passionate Liverpudlian Peter Hooton has agreed to chat with us ahead of the North West derby this weekend. The Farm front man first put pen to paper with a football/music terrace-fanzine “The End,” which he edited as a youth worker. Since then he has become an iconic figure in the city of Liverpool.

Having achieved experience with fanzine work, Peter went on to help write a book on Liverpool’s success in Europe called Here We Go Gathering Cups in May. Being a committee member of Spirit of Shankly, a supporters union which was set up in 2008 with the aims of ousting controversial owners Tom Hicks and George Gillett, Hotton is respected amongst fans.

Were you surprised when Dalglish got the sack?

Not really to be honest. I don’t think Fenway Sports Group wanted Dalglish in the first place but Hodgson’s awful stewardship meant they had to appoint someone quickly to bring an element of stablility and appease the fans or I think we would’ve been in a relegation battle. We all know then Dalglish did very well in the second half of that season 2010/11 so the owners were left in a Catch 22 situation. It was probably a bit of a knee jerk reaction to appoint him for 3 years but it was popular at the time. We actually played some great stuff last year but we just struggled in front of goal. The fans were pleased with the cup runs but then we were told they count for very little- welcome to modern football, balance sheets and smiling accountants.

Some of the players he bought as we know were massively over-priced Carroll, Downing, Henderson and they probably sealed his fate! Carroll was probably worth £15 million tops Downing £8 million and Henderson £4 million. It was as if other clubs knew that that we were like a drunk with a lottery win after the Torres deal.

Since the season began, Liverpool have lost and drew two league fixtures. Do you believe Rodgers will turn things around at Anfield?

I like Rodgers football philosophy but that doesn’t guarantee results in the short–term. I used to argue with fans during the Benitez era as fans had massive expectations after Istanbul in 2005. We progressed every year in the Premiership from 2004-2009 and I think Rafa was actually building a dynasty. The problem he had was that the £200 million he earned from Champions League success over those years didn’t go into the squad. It went to paying the interest on the debt Hicks & Gillett had used to purchase the club in 2007.

Liverpool fans wanted the Holy Grail of the Premiership and so many fans went along with the media and started to openly criticise Benitez even though his net spend was less than £20 million per year. Football fans don’t tend to study the economics of football so when we over-achieved and came 2nd in 2008/9 they blamed him for not winning the league and letting United equal 18 titles. In the summer of 2009 I knew the players he had lined up from the Alonso sale (£30 up front) and his £20mill guaranteed. He didn’t get the expected funds as approx £36 million went to pay debt so he was left with £14 million to spend. His targets were Silva, Barry and Jovetic. Get them in our 2009 squad and we would have come very close or even won it the next year. Instead with the £14 million we ended up with Aquilani (injured but cheap down payment £5 million) Johnson (£8 million as Portsmouth owed us £10 million from the Crouch deal & everyone knew they weren’t paying their debts but it went in the press as £18 million and Kyrgiakos £2 million). We came 7th but the sheep who didn’t understand what was going on with the economics of the club blamed Benitez and ‘enemies of the club’ ie people with total self-interest on the agenda effectively sacked him.

Last week the publication of the Hillsborough Independent Panel’s report into the disaster was released. The families know the truth now, so what’s next?

If we perverted the course of justice which many have done in this process, we would have our front doors kicked in. Before last Wednesday I wasn’t really in favour of criminal prosecutions but the sheer scale of the cover up and deceit was so massive it needs to be done. Our society is based on consent and accountability but these people thought they were above the law. Many of the rank and file officers/staff both in the police and emergency services weren’t even aware that their ‘honest’ accounts of the chaos on the day when they criticised the organization and response, had been deleted or altered. If something isn’t done ie criminal prosecutions, confidence in the legal system will never recover. I think the ‘establishment’ are fully aware of that so I think they will be brought before the courts. I was there on the day and I knew we weren’t to blame. In fact I was proud of our fans response which Justice Taylor way back in 1989 called ‘magnificent’. In his judicial inquiry straight after the disaster Taylor said Liverpool fans ‘initiated and orchestrated the rescue operation’ and after reviewing  71 hours of video evidence 3776 witness statements and 1500 letters there was not a shred of evidence to support The Sun’s version of events.

Of course after last Wednesday we know a Tory MP with senior members of the police made up these allegations to shift blame. The FA and SWFC are also culpable as over the years their had been many near misses including 1981 semi Spurs v Wolves and 1987 Leeds v Coventry. The ground was basically a death trap but neither SWFC, the police nor Sheffield City Council could ever agree on anything so nothing was ever done. They didn’t even have a safety certificate and cost cutting and complacency was rife. The fire service had warned SWFC that the pens were not safe and the infamous tunnel shouldn’t slope towards the terracing so contravening the Green Guide on ground safety but their warnings fell on deaf ears as they wanted to spend as little as possible.

They are a totally different breed. Hicks and Gillett promised the earth delivered very little and just drained the club’s income to pay the interest on the money they had loaned. FSG have promised very little but are in many ways even more elusive. Hicks and co used to come over with a big fanfare so it was easy to target them and even engage with them but FSG are fundamentally absent owners. LFC are just a part of their empire and until they have a Chairman employed on this side of the Atlantic, I can see them coming more and more under the microscope. Hicks was a ‘Republican’ who helped get Bush in the White House and John Henry and Tom Werner are Democrats, so they do things differently but they need to address the stadium issue now otherwise we will slip further down the financial league which will effect the squad and inevitably results and league position.

Probably our 4-1 victory at Old Trafford in 2009. I honestly believe we were the best team in the Premiership that year – they say the league table never lies but that year was an exception in my opinion. If we had won the league that year it would have been a massive achievement and probably better than our triumphs in the 70’s and 80’s as it would’ve been against all odds, i.e, depth of squad/wages/ etc.

Knowing how the fanzine industry works, do you still go out on match day and buy fanzines?

Yes, I always try and read other fanzines but I rarely buy them. I go into WH Smith and have a good read but I can’t be seen to be buying one. Haha.

Thoughts on leaving Andy Carroll go and failing to bring in another striker before the deadline?

On the gravevine I had heard that as soon as Rodgers got the job, Carroll would be out the door. He just doesn’t suit his style and there would always be the temptation to launch it up to him. Also I don’t think technically he is very good and to play Rodgers style you need hard working players and Andy Carroll certainly doesn’t fit into that category. The word on the street was that many of the players were surprised at his lack of technical ability and Dalglish obviously never rated him as he hardly ever started him. “Bag of shite” is the Liverpool expression but he will do well at West Ham. Stoke would be the perfect club for him though!

Prediction ahead of the game?