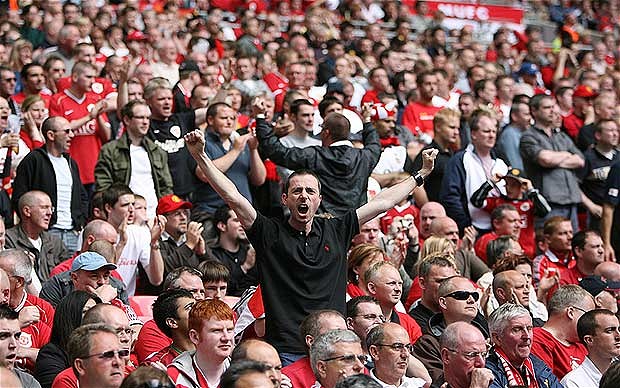 Sir Alex Ferguson has asked travelling Manchester United supporters to be on their best behaviour at Anfield on Sunday. It’s Liverpool’s first home fixture since the findings of the Hillsborough Independent Panel were revealed.

Manchester United and Liverpool games often bring out the worst in both sets of supporters, but the vast majority of the 2,814 Reds attending on Sunday will be far more concerned about how their team does instead of disrespecting the 96 football fans that died at the Hillsborough disaster. It will be an emotional occasion and Fergie has openly spoke about showing respect.

“The great support you gave the team here [at Anfield] last season has seen our allocation back up to near-full levels. I want you to continue that progress today.

“But today [Sunday] is about much more than not blocking gangways. Today is about thinking hard about what makes United the best club in the world.

“Our rivalry with Liverpool is based on a determination to come out on top – a wish to see us crowned the best against a team that held that honour for so long.

“It cannot and should never be based on personal hatred. Just ten days ago, we heard the terrible, damning truth about the deaths of 96 fans who went to watch their team try and reach the FA Cup final and never came back. What happened to them should wake the conscience of everyone connected with the game.

“Our great club stands with our great neighbours Liverpool today to remember that loss and pay tribute to their campaign for justice. I know I can count on you to stand with us in the best traditions of the best fans in the game.

However a lot has been made in the press about United fans signing “always the victims, it’s never your fault” during the 4-0 win over Wigan at Old Trafford. Newspapers like The Daily Express wrote inaccurate headlines such as “Manchester United fans mock Hillsborough tragedy” after the game which, I feel, has overshadowed the upcoming occasion in an unnecessary manner.

In my match reaction for the Wigan game, I can be quoted saying: “Before, during and after the game, I heard the usual anti-Liverpool chants. Contrary to reports, there weren’t any chants about Hillsborough. These reports are misleading and are given the forthcoming fixture between the clubs and furthermore risks needlessly upsetting the bereaved families.

The meaning of the chant, for those that fail to understand, was explained brilliantly on the Republik of Mancunia blog during the week. The vast majority of Manchester United fans are respectful when events like these occur. Of course there are a few idiots that chant about Hillsborough, bringing a great deal of shame and embarrassment on the club.

Although, unfortunately, all clubs are guilty of having an idiotic minority within their fanbase. I always find it laughable when fans get on a moral high ground and suggest otherwise or tear us all with the same brush. Rivalry, at the end of the day, is perfectly fine. We hate scousers and always will, but Hillsborough is something else. The families of the 96 will tell you that.

We have all heard excuses for these chants, which is odd, seeing as they’re inexcusable. “You started it,” and so on. It’s pathetic and childish. Showing respect isn’t something I would classify as being difficult, especially for tragedies such as Munich and Hillsborough.

Tribalism is something football fans are proud of. We have it stronger than any other sport. So, if chanting about Suarez victimising his racial abuse last season is too much, hit them with the nineteen times chant. There are plenty others which can be classified as “anti-Liverpool” that the media haven’t put of the frowned upon list, therefore, we’ll let them be known.

MUST released a statement on the topic: Fans will be aware that there has been significant interest in the media about offensive chanting and gestures in reference to the Hillsborough and Munich disasters that befell the two clubs. As a consequence, we understand that Merseyside police and Liverpool stewards will be looking to take action against any individuals identified as engaging in this type of behaviour, whether they be United or Liverpool supporters.

Given the reaction to Saturday’s chants of “always the victims”, many United fans have pointed out that the song is not a reference to Hillsborough, which has also been acknowledged by Sir Alex Ferguson at his press conference. However in the current context, regardless of the motivation, it clearly may be perceived by Liverpool supporters, sections of the media, and indeed – judging by feedback – some United supporters, as inappropriate on Sunday.

It is not the role of MUST to tell any United supporter how to support their club but we do wish to reiterate the position of our organisation. We agree 100% with the statement made by Sir Alex Ferguson and wish is to leave no room for doubt – we unequivocally condemn chants mocking the Munich air crash, Hillsborough and indeed any other human tragedy.