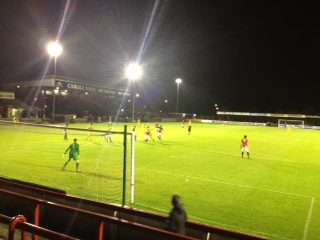 Manchester United opened up the defence of the Mancester Senior Cup with a convincing 4-1 win over Bury at Moss Lane.

Bury opened the scoring after three minutes due to slack defending and a nice finish from Elford-Alliyu. The Reds responded in the 10th minute with a deflected shot from Pettrucci easily saved. It took the lads a while to get into the game.

In the 19th minute King was brought down inside the box but the referee gave a corner instead of pointing to the spot. From the resuting corner, Robby Brady’s shot went straight towards the goalkeeper which he fumbled at first but finally held. In the 25th minute United were awarded a penalty after some great individual play from Macheda. Pettrucci stepped up and Bury keeper dived to his left and saved.

United continued to dominate the first half with shots from Tunnicliffe, Macheda and Brady. The pressure paid off in the 41st minute when an unchallenged run by Tunnicliffe followed by a squared pass across the box into Josh King who finished off.

United came out after the interval the same way they finished the first. Lingard put United in front on the 51st minute with a cool finish. Shortly after, King went on solo run and the goalkeeper pushed it onto bar.

The Reds increased the lead following King’s effort. Bury’s defence fell asleep and Vermijl  walked through to make it 3-1. United continued to dominate and Macheda scored in the 71st minute after the ball dropped inside the box. We eased off late on as the game was won.