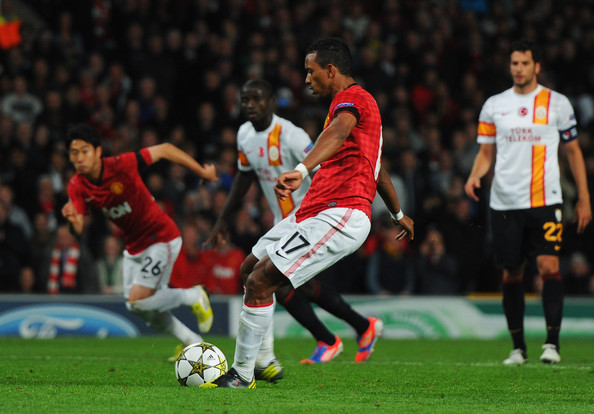 Sir Alex Ferguson admitted that he wanted Robin van Persie to take the penalty against Galatasaray on Wednesday night, not Nani. Manchester United have missed three consecutive penalties this season.

From the spot, we just haven’t been good enough. Nani following on from Javier Hernandez, who failed in the 4-0 win over Wigan Athletic, and Robin van Perise, who missed at Southampton. Penalties shouldn’t be that difficult, but we’re doing a good job at making it look that way.

In a game that United looked nervy at times, Michael Carrick’s goal after 7 minutes proved decisive. Following a through ball from Shinji Kagawa, the England international got past the Galatasaray goalkeeper Fernando Muslera whilst being fouled and scoring at the same time.

However, Ferguson admitted after the game that he was surprised when Nani stepped forward for the penalty. The Portuguese conducted a similar run-up to his spot kick as Robin van Persie, who was also criticised for missing.

When asked why Nani had taken the penalty Ferguson said: “I have no idea. I think Nani just ran and grabbed the ball. I thought Robin should have taken it. I think we will have to decide before the game, which is my fault, I should have done that.”

I had a feeling going into the game that memories of last season’s shocker in Europe would effect some of the players, being more careful about putting a foot wrong. That showed and pressure crept in. Thankfully, United picked up the all important three points.

“Obviously after the experience of last season, which was unusual for us, the result was the most important thing,” Ferguson said. “Also for our club, it’s about more than that. It’s about ­playing a brand of football we’re ­recognised for and at times today we did play some excellent football.”