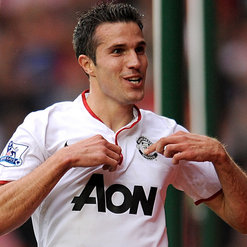 Robin van Persie left Arsenal for Manchester United at the end of the summer in search of trophies. The Dutch international has settled brilliantly at his new club, where he is already considered a favourite amongst the fans.

Following Sir Alex Ferguson’s capture of Robin van Persie, Arsene Wenger said he would have preferred to have sold the striker to a foreign club. However after a conversation with Edwin Van der Sar about Juventus and Manchester United, the 29-year-old made his own decision.

The former Arsenal captain played under Wenger for eight years before leaving to join United for a fee in the region of £24 million. In those years, he only managed to win the FA Cup and Community Shield.

Writing in his Eurosport column, Wenger praised Van Persie’s attributes: “Robin van Persie is the kind of player you rarely meet in your life: an exception, the very definition of the word.

“He has everything a coach dreams to have in a single player: he’s smart, classy, clever when he moves, has killer-instinct, and is focused during 90 minutes.

“He spent eight seasons with me, and he never stopped developing himself. We could never imagine he would become the player he is right now. It hurts to see him wear another shirt when he is at top level.

“You have to deal with it. That’s life. We are here to help people to express their talents. A coach must have a positive influence on their players’ lives.”

Wenger never learned from his mistake with Cesc Fabregas, leaving Robin van Persie go into the final year of his contract. That made it easier for clubs like United to sniff around and test possibilities.

The price we’re alleged to have paid, £24 million, is too much for a 29-year-old, especially when they’re in the last year of their contract. This fee hasn’t been confirmed by either club, so it’s more than likely a total if all add-on agreements are reached during his time at Old Trafford.

It’s a lot of money, but Robin van Persie isn’t your typical 29-year-old footballer. He’s the type of player that would improve any team and United, at times last season, lacked a bit of class. He has shown already that if you give him half a chance, he will make most of it.

2 responses to “Hurts Wenger to see RvP at United”