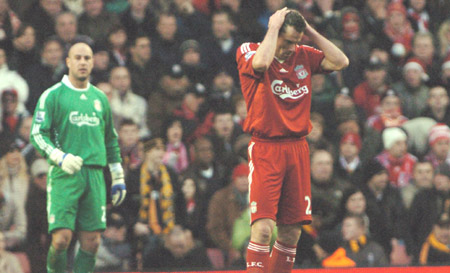 Liverpool veteran Jamie Carragher has mixed emotions about never winning a league title since turning professional. The defender admitted today that he is jealous of what Ryan Giggs and Paul Scholes have achieved down the years.

Carragher has just one year remaining on his current contract at Liverpool and he isn’t half the player he used to be. The clock is ticking and at this stage, it doesn’t look like they will be crowed Champions of England anytime soon.

When reflecting on his career, the 34-year-old’s best moment for Liverpool was winning the European Cup against AC Milan in 2005. However, our legends in question have done that twice (1999 & 2008). Carragher says that while he doesn’t fully regret having not claimed a domestic title, he still envies the success of Giggs and Scholes.

Between them Ryan Giggs and Paul Scholes have won 22 league winners medals, whereas Liverpool last won the league in 1990, when Jamie Carragher was just 12-years-old.

“I’d love to have won the league for Liverpool as it’s been so long,” he said. “But were we ever really good enough? We never threw it away. There was always someone better than us.

“But I played for my team my whole life and I’ve been one of the main players in what we’ve done. I could have won the league going somewhere else and just playing 25 games.

“I’m good enough to have won the league. I’m not trying to sound big-headed but more often than not we’ve had one of the best defensive records each season.”