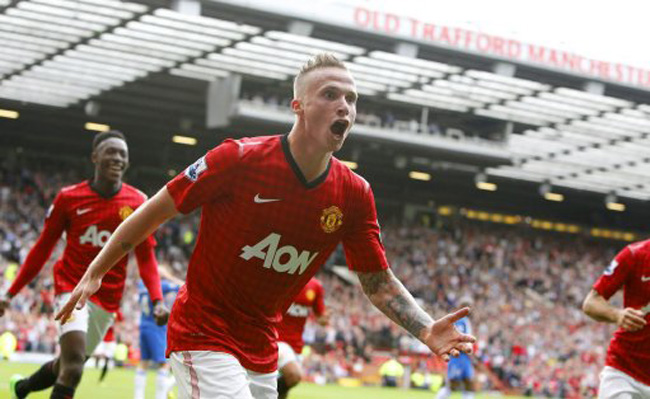 1. It’s been a while since we gave any team a hammering, especially without Wayne Rooney in the squad. Wigan have proved to be our whipping boys since being promoted to the Premier League in 2005. However since then, they only managed to take three points from United once. And that was last year at the DW Stadium when Shaun Maloney scored the only goal after 50 minutes of play.

Despite have a relatively slow start to the season, the United faithful expected a big win with hopes of our first clean sheet. In the first half we started to control the game but failed to put away chances. That changed in the second and United scored four whilst conceding none.

2. Having a seat in the Sir Alex Ferguson Stand, I had a good view of all four goals. Paul Scholes scoring the opener in his 700th appearance for the club, Javier Hernandez making up for his penalty miss, Alexander Büttner grabbing one on his debut, and Nick Powell killing the game off.

It’s not often you see two debutants score in the same game. In fact, the last time United witnessed such events was in 1905. Powell’s strike was Gibson-esque, but hopefully he’s more effective when on the ball and not just another one-trick-pony.

3. Büttner made his first start since joining the club this summer. It was clear last year that Patrice Evra had gone past the stage that we could expect 35+ games per season. Ferguson knew that, therefore, had to do something about it. Buying a player that nobody heard of is usually met by a 50/50 response, especially after being linked with marque or well known signings. However, Büttner made a brilliant impression yesterday, running up and down the line like Evra did a few years ago. His positional awareness looked very good as did his strength and usage of the ball. It’s difficult to rate a player properly after just one performance against a poor side, but I do believe he will open up opportunities for Ferguson to rest Evra when the busy months come around.

4. Following this week’s developments and release of files regarding the Hillsborough tragedy, the club made it clear that they condemn disrespectful chants relating to such events as Munich, Hillsborough and anything of the sort.

Before, during and after the game, I heard the usual anti-Liverpool chants. Contrary to reports, there weren’t any chants about Hillsborough. These reports are misleading and are given the forthcoming fixture between the clubs and furthermore risks needlessly upsetting the bereaved families.

We always hear people say don’t believe everything you read. You’d think after the lies Kelvin MacKenzie spread about Liverpool, the fans would have more sense.