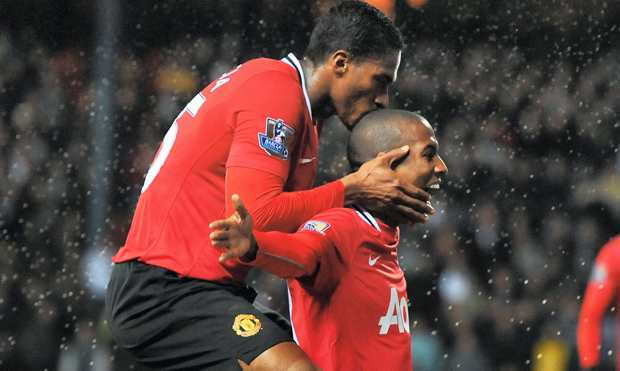 Ashley Young has praised his fellow Manchester United winger, insisting that the Ecuadorian is a complete player that deserves more respect for what he does on the pitch.

The 27-year-old, who joined from Wigan Athletic in 2009, had one of his better seasons last year before being voted fans’ and players’ player of the year awards.

Ferguson made it clear after he signed that Valencia wasn’t a replacement for Cristiano Ronaldo. It was a new start. Time for someone else to stand up and be counted. Wayne Rooney did that to some extent.

It’s not difficult to spot the differences and why Ferguson made that point straight away. Although, it doesn’t mean the signing was unsuccessful. Footballers like Ronaldo don’t come around very often, but when they do, all you can do is sit back and admire what they can do with the ball.

“Last season he had everything,” Young told the club’s official website.

“He attacks, he defends, he can shoot, he can cross, he can pass… he has it all and that’s why he scooped up everything at the end-of-season awards. It’s why the players voted for him and it’s why the fans voted for him.

“He’s fantastic to play with. Antonio, like every other player, knows how to look after himself as well – he knows what to eat, what to drink and he works closely with our fitness coaches.”

Just like Young says, Valencia attacks, defends, shoots, crosses and passes. His style of play is very direct which is something rare to find in a winger nowadays. The strength he holds along with that pace is incredible, and the majority of full backs aren’t able to handle it.

Sir Alex Ferguson is always full of praise for Tony V. The Scot believes he will improve again this season. Lets hope Fergie doesn’t try him at right back too often…

“Antonio is always very professional and a great human being. I’m very happy with him,” he said.

“He’s one of those players who is constantly maturing. Without doubt, his best position is wide right – he’s fantastic there.”