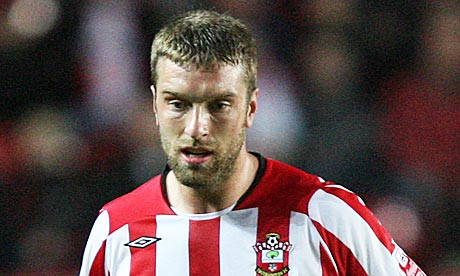 This weeks challenge is that of Sourhampton. How many Manchester United fans can remember the awful away days at the Dell? An awfully intimidating ground where we suffered some terribly humiliating defeats. It was after our 6-3 defeat on October 26th 1996 that an incredible alliance was almost struck.

The world of football rocked to its very core by the trouncing United had been given and as is often the case many interested spectators started to wonder how they might benefit. The chairman of West Ham, Jean-Pierre Papin called the dell and had a very explicit conversation with Matt Le-tossier. They talked in French for a full hour and had Le-tissues nose not broken the phone the conversation would have gone on. Not ten minutes later the Dell hot line rang again, this time it was the owner of Northampton town, a certain Doctor Marten. He spoke to Le Tossier briefly but with great passion and the beaky channel islander reciprocated. Something massive was being created.

Finally, before Le Tiss could tuck into his weekly post match plate of caterpillars there was a fax received from Eastham & Barking FC. It simply said “we agree”. Le Tiss barked to Francis Benali “it’s on”.

For some time now Southamton, West Ham, Northampton and Eastham had been discussing joining forces to create a “Superham” alliance. The only thing that has prevented it was a disagreement over the name, but over a yard of meat at the “Superham” summer convention they had all agreed that if Southampton beat Manchester United then Le Tiss could choose he name of the Ham superpower. The islander had chosen “Ham, Ham, Ham & Ham United Deportivo Athletic” and so the final detail was in place.

The next day the chairman Mark Hamill (off star wars) went to the FA to present a case for their merger but he was an hour late to the meeting due to a commitment to the North London Yoda fan club AGM. That was his fatal error. 60 minutes is a lot of gin.

This weeks Dangerman is Ricky Lambert, the cheeky scamp.