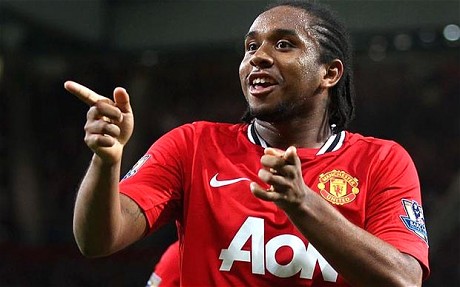 Rarely has a player polarised Old Trafford opinion than Anderson Luís de Abreu Oliveira, Ando for short or Andesron when misspelled. Big things were expected of the Brazilian after his massive £20 million move from FC Porto in 2007/08. He had the reputation back home in Brazil as a goal-scoring midfielder, even compared to the legendary Ronaldinho. Pressure? And some.

However, his undoubted potential has been hindered throughout his brief career by a catalogue of injury problems. He had a decent goalscoring record at his first club Gremio, his only full professional season there was curtailed, only managing 19 appearances but found the net 6 times. He moved to Porto, where again he would only spend one season. He was forced to miss 5 months after breaking his leg. Is it any surprise we were keen to sign Ando, given our record of signing players recovering from serious injury? Hargreaves anyone? Van Nistelrooy?

If you look around some of the United players who embarked on pre-season this year, there are players at opposite ends of the footballing spectrum. Take Paul Scholes for example; 12 months ago he was probably sunning himself on holiday… or in Oldham, probably thinking his days of suffering the pre-season pain were long gone. But alas, thankfully he is back and ready to attack the new season. The other end of the scale sees new arrival from Crewe, Nick Powell. He is likely to be rekindling childhood memories of feeling like the new kid at school. He will be chomping at the bit to prove he is worth a place in Sir Alex’s already exalted squad.

Someone else raring to go is Anderson. We have seen the best and worst of Anderson, from taming Steven Gerrard and Cesc Fabregas on opposition turf, to returning from injury heftier, crashing cars and breaking club curfews. It is now or never for Anderson, and doesn’t he know it.

‘I need to prove what I can do. I know the boss and my team-mates believe in me. I’ve just had bad luck. I want to improve as much as I can and help the team win trophies”.

To fulfill his potential and justify the loyalty Sir Alex Ferguson has shown, there is no doubt the effervescent Brazilian will need to have an unperturbed and successful 2012/13 campaign. Anderson’s main asset is his bustling energy, enthusiasm, his inventive range of passing and vision. Yesterday, we saw snippets of Anderson’s brilliant best: akin to the start of last season, against Fulham Anderson formed an excellent understanding with local prodigy Tom Cleverley, both putting in genuine high-quality performances- their flair, attacking intent and high work-rate lifts the crowd and in tandem with Shinji Kagawa, wingers, Rooney and Van Persie, it’s nothing short of mouth-watering.

If Anderson manages to stay free from his injury demons and maintains or betters the level of performance we saw from him yesterday, the so-called necessity to buy a central midfield could be redundant. Ando plays on the front foot, with drive and attacking vibrancy, the style that puts fans on the edge of seats. Aside from all his attacking talent, he relishes the physical battle, he can add bite in the midfield that was evidently lacking last Monday.

Seemingly, Anderson’s progress has been derailed due to the fact that he has not actually been played in his niche position. Upon his arrival, United had a plethora of attacking arsenal, Ronaldo, Giggs and Nani on the wings, Rooney, Berbatov and Tevez up front. This rendered his aim to play in his preferred position, either on the wing or the classic No.10, limited. When the proverbial sick-note Owen Hargreaves departed, Anderson was forced to become more disciplined and rein in his attacking verve, converted to an almost deep-lying playmaker. This is where his penchant for the physical side came in, his shackelling of genuine world-class players Gerrard and Fabregas endeared him to the United faithful and earnt him a rather popular terrace song, well he is better than Kleberson!

One common criticism of the charismatic Brazilian, is his figure. Many are of the view that he rather enjoys the range of food England has to offer a bit too much. However, Anderson looks a lot trimmer and dare I say it, hungrier to become a mainstay in United’s midfield. This season would be the best time to showcase his talent, given it is likely to be the ginger maestro’s last season in Red and the Welsh wizard not too far behind.

Yesterday was a game of two halves- Anderson was pulling the strings in the first half, Moussa Dembele, a reported target of United and Real Madrid, stole the 2nd half show. So what was good about Anderson’s display? He epitomised what was good about United’s first-half performance- the passing was crisp, quick and accurate; there was an urgency about our play, much-needed after going behind in the 3rd minute. We were at our best last season with the high-tempo attacking, which we were devoid of at Goodison Park on Monday night. Anderson was popping passes at will, many of which were one touch which managed to stretch Fulham’s full-backs. Ando showed a delightful range of passing and was imaginative, one particular pass out to Antonio Valencia in the second half was ridiculously good.

Ando was substituted with 10 minutes to go for Ryan Giggs, he went off to a standing ovation. In the past this would only be as fans were pleased to see the back of him, this was different.

At 24, he is at the perfect age to make Fergie’s faith vindicated. He has reached the make or break stage in his career where he needs to fully stamp his authority in United’s midfield, replicate those displays that warmed him to the United faithful. Having been a regular at the beginning of last season it was staggering and disappointing that Ando could only muster one more appearance before injury played havoc once more. Anderson seems to have shed a fair bit of weight and looks fitter and ready for the new season.

Time will tell whether he can stay clear of injury and have a successful campaign, it’s time for the real Ando to stand up and deliver.