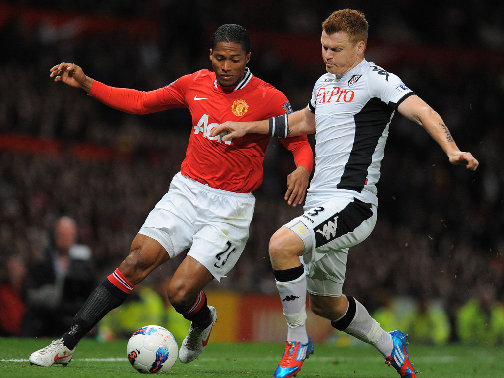 After a horrific result away to Everton on Monday night, Manchester United hope to put things straight today when Fulham travel to Old Trafford. It’s our first home game of the season which has me optimistic.

It wasn’t an easy ride at Goodison Park but is it ever? For United, it has been proven to be one of the most difficult grounds to get a result from. Sir Alex Ferguson slated David Moyes’ tactics in a post match interview which I found unnecessary. Marouane Fellaini knew what he was doing when sticking tight to Michael Carrick and not Nemanja Vidic.

Whilst our previous game picked up plenty of negatives, it’s important to take note of the positives. Shinji Kagawa and David de Gea were both exceptional. The Japan international passed the ball brilliantly and made a magnificent impression in his Premier League debut. As for David de Gea, we would have lost by a larger margin if it wasn’t for him between the sticks.

Amongst the negatives were Wayne Rooney and Luis Nani. Rooney, for starters, has looked overweight ever since joining the squad on pre-season tour after the European Championships. When you’re the highest payed player in the squad it’s expected that you stay fit during the off-season too. Nani was his frustrating self crossing poor balls inside the box. Yet again, his corners failed to beat the first man.

In his press conference on Friday morning, Ferguson hinted that we could see Robin van Persie make his first start for Manchester United. Also, while unveiling Alexander Buttner to the press he said it was ‘obvious’ that the Dutch full-back would feature at some stage.

The Lilywhites put the sword to Norwich last Saturday with a 5-0 victory at Craven Cottage. Martin Jol couldn’t have asked for a better start before a tough game against Manchester United the following week. It’s important to get off to the best start possible when you have an upcoming fixture like this.

Martil Jol will, once again, be without his want-away striker Clint Dempsey who bizarrely wants a move to Liverpool because they fit his Champions League needs. Er… Rightfully, the fans have turned their back on the American since he kicked off a tantrum about moving to Merseyside.

Fulham don’t have any injury concerns unlike ourselves. They will be up for this one after slaughtering the Canaries last weekend. We will more than likely see them with the same starting eleven from that game since it worked so well.