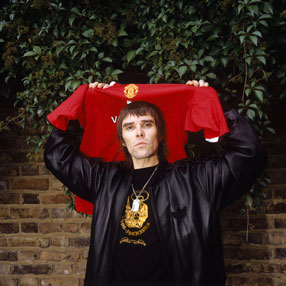 The Stone Roses played a tribute to George Best during their gig in Belfast earlier this week. The alternative band, who are from Manchester, are known for being a group of Reds (with the exception of Reni, who supporters City) and having one of their greatest anthems played at Old Trafford on match day.

Ian Brown shouted This is the One for “Gerogie the Belfast Boy” to an audience of thousands who chanted United in response. Brown has been a season ticket holder at Old Trafford for years. He gave a brilliant interview to the Guardian on his sporting life which is full of everything United.

The group headlined the second night of the Tennent’s Vital open air music festival and delighted the audience with classics such as Fools Gold and Mersey Paradise. However, the greatest reception came when they payed tribute to former Manchester United and Northern Ireland legend Best, who passed away in 2005.

When Brown, the front man, was growing up in Manchester he used to hang around outside Georgie Best’s boutique on Bridge Street where he would wait for the Belfast Boy himself. He often speaks about how Best bought the children sweets from around the corner before telling them they couldn’t hang around here all day.

Similar to the way Oasis are often associated with City, the Roses represent United. Tough luck on Reni, Brown would say.