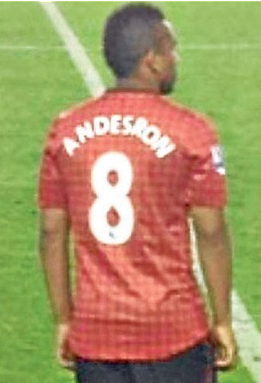 Manchester United midfielder Anderson came on as a substitute in last night’s 1-0 defeat at Goodison Park not quite looking himself. Whoever was in charge of printing the players’ names of the shirts misspelled his name as Andesron.

The Brazilian came on in the second half but while he was waiting to be introduced, a fan from the crowd spotted that the R and S were the wrong way around. Unfortunately, it was not a new midfield signing which Reds have been crying out for…

However, it’s not the first time Manchester United have made such a blatant error.

John O’Shea had S’hea on his shirt for the 2003 Champions League quarter-final against Real Madrid. David Beckham played the Community Shield against Chelsea in 1997 as Beckam. Not to forget Tomasz Kuszczak, who had Zuszczak on his back for a Carling Cup tie with Crewe.

Unlike journalists or blog writers, Albert the kitman or whoever is to blame cannot use the typo excuse.

2 responses to “Who is Andesron?”