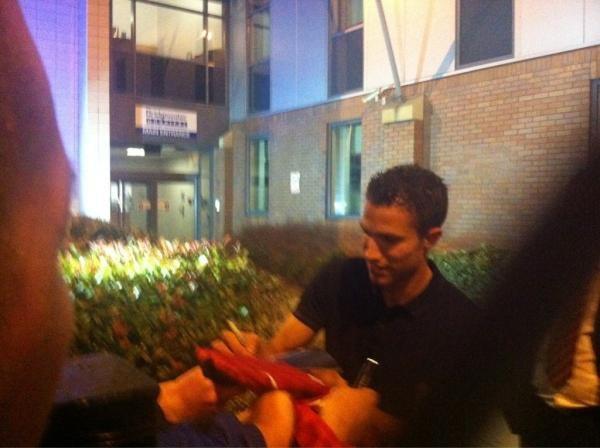 Robin van Perise arrived at Bridgewater Hospital after 9pm to undergo a medical after agreeing personal terms with Manchester United. The Dutch striker flew to London that morning after being away on international duty.

Robin van Persie entered the hospital with a big smile on his face, whilst waving towards supporters that spent hours outside awaiting his arrival. The 29-year-old took his time inside to pose for photographs with a young disabled Manchester United fan before undergoing a medical.

The medical took around 3 hours to complete and Robin van Persie was back outside signing autographs for the patient supporters. Two fans were pictured with a banner saying “who needs Batman, when we’ve got Robin“?

Sir Alex Ferguson says he is pleased with our new signing and claims he now has four strikers to rival his famous 1999 quartet. The boss told reporters at his press conference: “Rooney and Van Persie are two fantastic players and it’s great to have both of them. What it gives us is more strength and combinations up front. Going back to the 1999 season, we had Yorke, Cole, Sheringham and Solskjaer, the four best strikers in Europe.

“We’re getting towards that now with Wayne, Robin, Chicharito, Danny Welbeck and Shinji Kagawa. It’s a fantastic collection of players. I just hope I pick the right combinations.

“It’s great to have a player of Van Persie’s quality to come into the squad as it is. I’m really pleased.”

That’s quiet a statement for Fergie to make. Although in 1999, we had the best midfield and goalkeeper in Europe. That’s obviously not taking anything away from the strikers, who were exceptional.

Ferguson also confirmed he hopes to have the deal completed before lunchtime Friday, so he can give Robin van Persie he debut against Everton on Monday night.