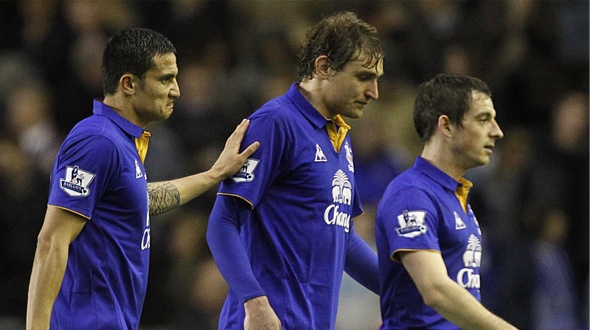 In previous seasons I would have picked Tim Cahill without hesitation. He was great in the air and had a knack for “arriving late”. These two attributes were of course down to the tiny wings that he manages to conceal under his football shirt.

Poor Tim was hatched by a migrating heron but was abandoned by his parents when his ‘father’ Jebbediah Cahill disturbed the nesting biological mother. Wracked with guilt Jebb decided to raise the heron hatchling as though he was his own.

Over the years a huge change took place in the boy-chic and as his beak regressed he grew stubby arms and legs, although his tiny wings remained. The cost of feeding him Koi Carp was difficult to fund for Jebbediah and his wife Dave, so eventually Dave was sent to work the streets as a low class hooker. Dave managed to earn hundreds of dollars a night through his trademark “topless hand shandies” and soon the family had managed to save enough money to have little Tim operated on by Australia’s premier plastic surgeon, Jason Donovan.

Jason worked his magic and young Tim was miraculously transformed into a nearly flawless little boy, but the ex-Ramsay St.Heartthrob could do nothing about the tiny wings. They had to remain as they were attached to his rectal tissue and had they been removed Tim would have been constantly, but ever so lightly, shitting himself.

When he turned 10-years-old Tim was tired of Australia and wanted to find out where his home would have been had his biological parents not abandoned him, so he waved goodbye to his adopted family and took flight. His wings were so tiny he had to stop regularly and the journey to England took him eight years.

He landed in a town called Grays and quickly located his real parents but they struggled to provide for him and he often fell off their nest, twice breaking his femur as a result of 50 ft falls. On one occasion he fell onto the then Millwall manager Lennie Lawrence and he saw the potential in the still raw heronboy. Millwall signed him and he guided them to an FA Cup final where they were torn apart by Ronaldo (not the fat one).

Tim was sold to Everton where they could better cope with the constant physio his tiny wings required. Heronboy was acutely aware that without this physio he would leave a thin trail of faeces behind him wherever he went. Tim enjoyed great success with Everton, leading them to mediocre seasons on many occasions before he was purchased by New York zoo, the fee being £100 and a Bengal tiger. Davey Moyes couldn’t adapt the tiger to the advanced midfield role that Tim had occupied for The Toffees, so he moved it quickly on to Chester zoo in exchange for Nikica Jelavic – who is this weekends dangerman.

I hope you have enjoyed your first In-depth look at the men that pose the most danger to our heros. Look out for Nikica.