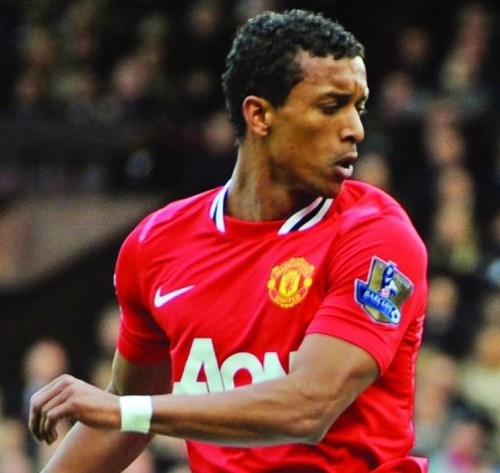 Speculation has been rife all summer that Luís Carlos Almeida da Cunha, known in the football world as Nani could be looking for a new challenge after five years in Manchester. Links to Brazilian money-chaser.. I mean kid, Lucas Moura, ensured that there were many gossip inches surrounding the future of our mercurial number 17. A recurring question that has been emanating in my head since all this guesswork about the Cape-Verde born winger is, ‘Is Nani too good to lose?’ One definite and immediate answer was drawn up, yes.

It is worrying news that Manchester’s version of Michael Jackson has yet to put pen to paper on a new deal. It is thought Nani is looking for a pay rise to bring me more in line with the highest earners on United’s books. I personally do not buy into the common disparagement from the Nani-bashers who claim he lacks consistency. Sometimes people forget that players are genuinely human. They are not robotic, they are allowed to have bad days now and again. Losing Nani would be a severely detrimental blow, Wayne Rooney questioned the future ambitions of the club in 2011 in order to sign a bumper contract. Would letting Nani go to pastures new, re-open that can of worms and place fresh doubts into Rooney’s mind?

For those who label Nani as frustrating and erratic in churning out consistent performances, if you look back to last season were there that many match-winning, game-changing moments in general? If you focus in on our £200,000+ a week striker, did he really do it when it mattered? I am not criticising the amount of goals he scored, not at all, and yes he did help us beat the Dippers, set us on our way to that memorable comeback against Chelsea and demolished Arsenal in that demolition. When it mattered, City home and away, he was anonymous. Yes, Jonny Evans’ red card changed the home fixture, but he was deployed as a lone striker, a game where a point would have sufficed, but a week after Danny Welbeck put in his best performance in a United shirt at home to Everton, he was dropped for the now-departed Park, who had not played for 13 games. Despite that odd decision by the manager, the point I am getting at is that Nani can sometimes be an easy target for fans when things go wrong, the old adage ‘win as a team, lose as a team’ is not always adhered to, Nani has sometimes had a rough ride along the way.

In the last two seasons, Nani has come of age in a United shirt. People on Nani’s rise in stock have suggested he has finally emerged from the shadow of CR7. I think it is unfair to state this. Cristiano was a unique player, something very special, there is a reason Ronny only gets compared with Lionel Messi. They are both off the scale. Of course, Nani stepped up to the plate after Ronny left, he had to be replaced. It was his turn to deliver, the next Portuguese to wow the fans. Nani is a showman, he would have been affected by Ronny’s excellence, he had limited opportunities to showcase his credentials, but the comparisons between the two Portuguese United past and present from the media probably placed unnecessary burdens on Nani. Let’s stop putting pressure on Nani to outdo one of the greatest footballers that’s ever played the game and just accept the fact he’s a hugely talented footballer we’re blessed to have.

In the chaotic and extortionate climate of the transfer window, where unproven kids are getting snapped up for 45 million euros (you know who I mean), can we really afford to lose the services of a man who has 28 goals and 32 assists in the last two seasons? What value does that place on Nani’s head? Those are world-class figures in modern football, compared to yester year when 5 goals a season from your winger was deemed satisfactory. If Nani was plying his trade elsewhere, I can guarantee we would be interested in signing him, so the flack he gets on an almost weekly basis despite those figures is astounding.

When one assesses the trophy laden years at Manchester United, there are very few grumbles. If we were to nitpick, 3 European Cup successes is not quite good enough, the Dippers have five, and aren’t they quick to remind us of that? Sir Alex has stated for a long time that he wants one more Champion League success during his dynasty. If we are to challenge Barcelona, Real, Bayern etc, you would expect Nani to be an integral part of that mission, would you not? The premise that he blows hot and cold is babble in my book, every player during a season hits peaks and troughs. An on-form Nani is as destructive and lethal a winger as anybody, I refer you back to the figures in the previous paragraph, can he do any more? Nani has made the world’s best look inferior at times- he tore apart Phillippe Lahm at Old Trafford and has embarrassed Ashley Cole, both domestically and when we’ve met Abramovich’s riches in Europe. So to sustain a formidable European campaign and for Fergie to achieve his goal, he will need world-class match winners such as Nani.

Nani is 25 years old now, this suggests his best years are ahead of him, and what a frighteningly good prospect that will be. At 25 Nani could actually be stated as one of the elder members of the squad if you look at some of the first-teamers. He is older than Cleverley, the Da Silva’s, Smalling, Evans, De Gea, Welbeck and Chicharito. As Nani enters his peak years, him and our other genuine match-winner Wayne Rooney can be expected to spearhead a United attack that could be around for a while yet. This highlights his importance to the Manchester United cause, for me it would be Nani over Lucas Moura every day of the week. Nani knows the rigours and demands of the English game. Nani is a deceptively physical specimen, unlike Tony V who is just a beast, you can see the progression of Nani physically if you compare him when he arrived to the present Nani. This is why I would prefer to see Nani retained rather than buy a young novice to the English game, who is slight and the potential to get bullied, Iker Muniain comes to mind.

A quick summation of Nani’s qualities would be his trickery, pace, creativity and eye for goal. What is there not to like? Consistency aside, although a relatively moot point, what more do fans want from Nani? He has justified why we forked out £17 million for his services in the last two years alone, let alone his early promise. He will soon be approaching the zenith of his capabilities, so it would be cataclysmic to sell now. Not many people are blessed with the gift of doing what Nani does. The ability to beat a man, the box of tricks, to score solo goals like against Chelsea last season, these do not come naturally to most players, they do with Nani. This type of player is worth their weight in gold, they just need to be appreciated. If he had Ronny’s or Messi’s goalscoring potential, can you imagine his value? Not that double figures in the last two seasons should be scorned or frowned at.

United’s charge was decimated last season by injuries. If you look at the Blackburn debacle (get a sick bucket if you need to) our lineup was makeshift to say the least. Rooney was sat in the stand, getting punished for going on the lash with Gibbo, we had Rafael in central midfield, with natural midfielders Carrick and Tony V in defence. I know what you’re thinking, Rafael could easily have gone to right-back with Michael and Tony in midfield, that decision came 45 minutes too late, we lost the match, that 3 points would’ve made us Champions. Who is to say that injury backlog won’t strike again? Let’s say we’ve sold Nani, Tony V and Young are injured. It’d be square pegs in round holes again, at times last year Welbeck was used on the wing, you want your best players in their best positions, we wouldn’t want Shinji operating on the wing or Danny out there again. Nani is a shoe-in for selection when on-form and confident, now is the time to put the collective United arm around Nani’s shoulder.

There have been some truly god-awful goal celebrations down the years at United, the voice in my head is telling me not to mention Ince and Giggs but there you have it, if you can’t remember it, first of all, kudos but secondly, research it. Lee Sharpe’s jelly-legged shuffle was very good, but the Nani-flip tops them by some way. The flip draws a big cheer from the crowd after every goal, do you really want the flip to disappear, meaning there will be a re-emergence of the olden day handshake and jog back to the centre circle?

Nani is a player who plays on instinct, if he has time to think he will probably cock it up. This was a feature of Louis Saha during his time at United, and players who play on instinct are often the most dangerous and unpredictable. If Nani doesn’t have a clue what he’s going to do, how will the opposing full-back? His impulsive nature is an asset, he can produce a bolt from the blue, this is what is often known as a ‘match-winner’. A title chasing team needs as many match-winners as possible, this is why it should be our prerogative to tie Nani down long-term.

Let’s assess the worst-case scenario and Nani is sold for say £30 million. Where is the most probable destination where that money will be stored? We couldn’t exactly table a bid to bring Ronny home. You can bet your bottom dollar that it will go to reducing the debt or the insertion of a swimming pool in Malcolm Glazer’s Florida home. We should not entertain any offers for Nani, given the likely consequences of any potential sale.

All in all, Ashley Young had a very solid first season at the club, I’d grade it 7 out of 10. Despite a fantastic start and end to the season, he almost went missing between October and February. This is where strength in depth is required to plug the gaps when players are injured or out of form. Young was a very astute bit of business, but as demonstrated in the winter grind, he didn’t deliver as much as we expected. Tony V has made the right-wing slot his own lately, so having Young and Nani keeping each other on their toes can only be beneficial, as they would churn out higher quality performances to keep their place in the team.

It must be stressed that Nani is still committed to the United cause, in an interview with The Times of India he stated, “I am very happy at Man United and have been there five years and won every title. The manager has great faith in me and that’s what is important. My agent is negotiating and we’ll see what happens.” The majority of United fans are onside with Nani too.

Give the man what he wants, Sir Alex.

6 responses to “The Nani conundrum – The indispensable luxury”