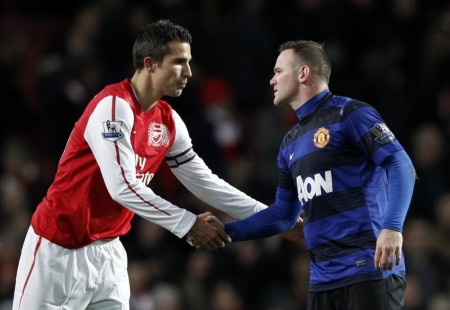 Wayne Rooney believes Robin van Persie would be a great addition to the squad if Manchester United can persuade Arsenal to allow him move up north. Sir Alex Ferguson revealed on Wednesday that they were struggling to find a breakthrough while negotiating with the Gunners, who are apparently giving nothing away.

It is believed that Arsenal want at least £20 million for the Dutch international but the Reds haven’t offered that amount as of yet. It’s difficult to know what way Ferguson will approach this after losing out on two signings this summer already – Eden Hazard and Lucas Moura – although, I expect to see an improved bid again.

According to the Telegraph, David Gill has stepped in to oversee a move for the Arsenal captain. The reaction to this has been predictable. Capable Hands understandably isn’t a popular figure because of his hypocritical stance over various things, especially Manchester United’s debt.

Speaking out about the possibility of playing alongside Robin van Persie at United, Rooney said: “He’s a player that I admire. He’s a fantastic player, he’s been amazing for Arsenal over many years. Last season was probably his best season of all, he scored a lot of goals. If he does come here he would be a great addition to the squad.”

Rooney missed a penalty during Manchester United’s pre-season friendly against Barcelona in Sweden on Wednesday and heads in to the new season looking unfit. Being the club’s highest payed player, I find that inexcusable. As a professional Rooney should be able to stick to a strict dite whether he’s playing football or not.

However, the Manchester United striker believes all the pressure will be on City as they try to retain the Premier League title. Roberto Mancini hasn’t brought any new names to the Etihad this summer and has apparently accepted defeat in the race to sign Robin van Persie with United favourites.

Rooney added: “I’m not sure we need any more motivation but to lose that way was difficult for us to take. It’s a good chance for us now to bounce back from that. This is our chance to show everyone we are a good team and we’re capable of winning the league this season. That’s obviously our aim.

“It’ll be a different situation for City, something they’ve never experienced before but we know all about it when you’re trying to defend your trophy.

“We know that over the years everyone has tried to raise their game when they play against Manchester United. Now obviously City being champions they’ll have to face that. Sometimes it can be more difficult.

“We know how hard you have to work to try and win it back but hopefully come the end of the season we’ll have it back.

“City have got some great players. Chelsea have spent a lot of money. So it’ll be a close run thing.’
Rooney was taken off at half-time on Gothenburg as Ferguson tried to rotate his squad ahead of the season’s opener at Everton in 10 days.

“I’m not sure why that was, you’d have to ask the manager,’ said Rooney. ‘I think he felt some other players needed minutes.

“But I’m excited, I feel good, I feel fresh and I’m looking forward to the new season. It’s a big season for us after last season and we all need to be ready for it.

“It’s a rare thing for Manchester United not to have any trophies. But we felt we were unlucky in the league.

“We know we let ourselves down in Europe. That’s something we’ve had to think about.

“I’m sure we’ll be a lot better this season. Our first aim will be to improve on last year and I think we can do that.”

It should be interesting to see how the emotional Arsenal supporters react to Ferguson and Rooney commenting on Robin van Persie while he’s under contract. They were reduced to tears whenever a Barcelona player spoke out about Cesc Fabregas.