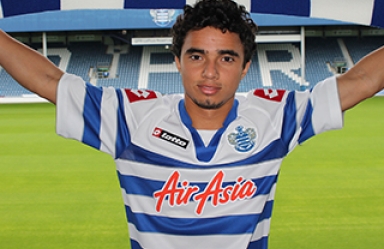 Fabio da Silva has kicked off a good start to his QPR spell. Showing all the quality that makes him a Manchester United player versatility, quality, and efficiency. Having started in every pre-season game so far playing as an left midfielder, central midfielder, and his preferred position left back.

Some might wonder what is Sparky’s intention for Fabio. For the reserves last year Fabio occupied midfield and did it well with his pace and skill. If you don’t remember he also did it against Arsenal in the F.A Cup sixth round.

In his first match Fabio played a full 90 minutes and earned the man of the match award playing in midfield against Sabah XI, who didn’t stand a chance. Fabio created two assist supplying Dijibril Cisse and Jay Bothroyd with two wonderful through balls. In his all around performance he only missed placed one pass albeit it was from a cross. Fabio didn’t have an attempt on goal unlike his twin brother Rafael, who would at least have taken a 29 yard shot from an acute angle.

In his last match he started  in a more central position alongside former Red Ji-sung Park, but after 35 minutes and an injury to the side Fabio was returned to his accustomed left back role after what can be called a succesful 35 minutes or so as a central midfielder. When switched back he wasn’t bothered by any of the players that weaved into his area, stamping out trouble before it could affect QPR’s defense. Most of the attack was subdued by the QPR midfielders because of a lack of passing and movement from Wycombe.

From what I have gather from QPR fans is that Fabio looks determined to make a splash. He has claimed man of the match once in two matches. And from what I’ve seen of him in pre-season he looks much sharper, engaged. Hopefully he can reach his goal to take Patrice Evra’s spot in the near future.

4 responses to “Update: Fabio on tour with QPR”