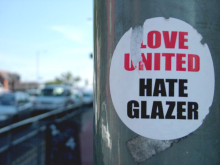 Manchester United Supporters Trust have come up with a simple online system to convince bankers about the IPO of Manchester United Football Club basically being a rip off. The plan to list United on the New York Stock Exchange came with a dramatic U-turn because the leeches changed their mind about using it mainly for debt repayments to majorly filling their own pockets. This is a major point that fans now feel is the last straw.

The Glazers now plan to sell shares that are unrealistic and won’t give anyone except them a penny as is explained below.

If the IPO is successful – that is, if they get the price they are asking and sell all the shares – the Glazers could be in control for a long time. Whether you pay attention to club politics or not, it’s not rocket science to understand how this puts the long term future of our club at stake. Debts and interest payments will continue to plague the club further behind our rivals in pursuit of the biggest names in the footballing world.

According to MUST, if the Glazers don’t get the price they want or raise enough money, they will be forced to consider selling the club. This alone tells you how desperate the family are when it comes to cash. Although, it all fails to surprise me. Since the takeover in 2005 their actions haven’t been exactly healthy for the club itself.

The idea I mentioned above depends entirely on fans individually taking less than 3 minutes of their time to put pressure on the banks by sending them an email expressing their opposition. After 4 hours of being online, 124,154 letters were sent surpassing MUST’s first goal 120,000. Since then, the independent fan group has set more goals and is looking to send millions.

It’s easy and like I said, it doesn’t take up a lot of time. This movement shows what Manchester United fans can do when they come together and help fan groups like MUST, who I feel come in for unfair criticism. To participate, follow this link.

MUST finished their statement by saying: ” This is the first of a series of actions we are planning over the next several days.” As you can tell, we have a busy week ahead of us. Don’t sit back and pretend everything is fine or being done for you. You can also help by adding #SayNoToIPO to your tweets or Facebook statues.