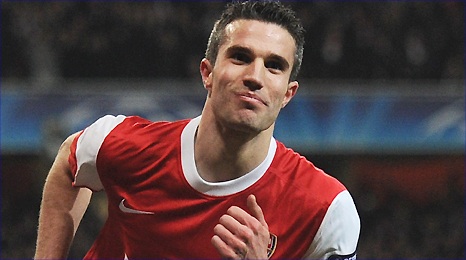 If you were to assemble a cocktail which epitomises the fearsome striking partnership giving defenders cold sweats, the deadly finishing of Robin van Persie alongside the tenacity, industrious and equally potent Wayne Rooney would prove difficult to trump on paper. However, this utopian combination draws a few interesting talking points – is the Dutch striker the main priority? How much of our budget would be blown? Is he worth the money it will take to prize him away from his Arsenal contract at 29 years old and no discernible sell-on fee?

United’s interest in Van Persie is genuine. It is rare at the best of times to hear Sir Alex Ferguson speak so openly about players who are not contracted to Manchester United. So for the manager to come out in impromptu fashion and declare an open interest in signing the prolific Gunner spoke volumes of his burning desire to win the race that has emerged for Van Persie. Much excitement has been generated amongst United fans across the land upon hearing United’s aim to snap up the Dutchmen, and for many the prospect of seeing Van Persie link up with England’s best striker is the stuff of dreams. It only seemed feasible to partner Rooney and Van Persie together in the annual fantasy football lineups, it seemed a distant pipedream to imagine the two together gracing Old Trafford in the flesh, on the same team.

United showed their hand early in the piece, by offering close to £15 million, which falls short of Arsenal’s valuation – more in the region of £20 million to even £30 million, which is frankly extortionate and deterring given Van Persie’s contractual situation. The next few weeks before the season kicks off will be the determining period of how serious Ferguson’s interest in Van Persie is. Arsenal’s so-far staunch resistance and obdurate insistence that they will hang onto Van Persie until at least January could prove to be a major stumbling block in the pursuit of last year’s top goalscorer in the Premier League.

In an ideal world for Sir Alex Ferguson, Van Persie would help sweep United beyond Manchester City and Chelsea to a 20th championship while also offering much-needed variation and a ruthless streak in the Champions League, where the 2008 and 1999 victors failed to progress beyond Christmas last season.

Ferguson often had United deployed in a 4-4-1-1 formation in the last domestic campaign, with Rooney in the hole, the classic No.10 position that is his niche position. In Europe the England striker was usually played at the head of the manager’s preferred 4-5-1 spearheading the attack, which was detrimental to Rooney and ultimately lacked fluidity and balance, Rooney was even utilised in the middle of midfield given injuries to Tom Cleverley, Anderson and Darren Fletcher and Paul Scholes watching the dearth of creative flair from the stands at the time. Rooney’s willingness to plug the gap in the engine room meant his qualities in front of goal were missed and left United relatively fruitless up-front, meaning a premature exit from Europe’s top competition. Van Persie will enhance United’s chances of European success, giving defenders pan-Europe sleepless nights.

The urge to link RVP, the Professional Footballers’ Association and Football Writers’ player of the year, with Rooney and watch defences shredded and the goal tally go through the roof is a seriously exciting and enticing prospect for United fans. £20 million and a significant wage packet (probably on a par with Rooney) could possibly see RVP through the doors at Old Trafford and would ensure United could arguably boast about having the best striking partnership not only in domestic football but on a larger scale, arguably the most deadly duo in world football currently.

The Dutchman’s transfer would also benefit United in the long as well as short-term. It would allow Ferguson to wrap Rooney, who turns 27 in October and ought to be entering the honeyed years of his career, in cotton wool from time to time. Rooney has been United go-to man over the years and the sheer amount of fixtures over a season have had after-effects on Rooney’s fitness, particularly at International level. Rooney will play longer games in the future with the help of extended rest periods, putting his feet up on the occasional weekend will decrease the possibility of injury that comes from exhaustion and a relentless, innate desire to play every week. Having Van Persie, who scored 37 goals last season, would allow United to rest the Liverpudlian more and help take the weight off the forward who managed 27 Premier League goals in that previous campaign, while Javier Hernández scored 10, Danny Welbeck nine.

There is an over-riding question some United supporters may ask, though, should acquisition of Van Persie should be the priority. Especially as the Old Trafford war chest is reduced due to the financial constraints that come with the territory of the Glazer ownership.

United’s chief operating officer, Michael Bolingbroke, has recently come out and reassured United fans that up to a further £40 million could be spent in the transfer market this summer- the club was ‘giving guidance at the moment that the current transfer period could result in net expenditure nearer a further £40 million’. Half of that figure would probably suffice to land Van Persie, but with a strong interest in Sao Paulo’s Lucas Moura and the quoted fee surrounding the 19 year old, a bit more than the suggested £40 million will need to be spent to land both top targets, unless we cash in on Nani, whose contract situation appears to have hit an impasse.

The common and recurring quibble around Sir Alex Ferguson’s policy in the transfer market is his reluctance to delve into the upper echelons of the market and spend sums only seen across the town and across the pond. However, the outcry urging Ferguson to spend big is increasing in volume, especially with the evergreen Paul Scholes and Ryan Giggs in the twilight of their careers.

United require a general who can rule midfield, a driving force who is as comfortable repelling incoming artillery as he is plotting and leading the charge at the opposition. United seem prized out of moves for wantaway Croat Luka Modric and Porto’s Joao Moutinho. However, there is a compelling case to be made that Van Persie is the closest clone to Rooney there is. Not an exact replica, by any means. But the Arsenal man has proved he can score as heavily as his proposed new team-mate. And Van Persie possesses the schemer’s brain and vision that has made Rooney the main man for United and England. Each can play alone in attack, each likes to drop off: so logic suggests Van Persie would have a seamless transition to Old Trafford life. Rooney could then be deployed in a deep-lying playmaker, almost trequartista role with Van Persie leading the attack.

However, a telling caveat with Ferguson is that he is a master of disinformation, a required ability in the transfer silly season. Despite hinting there may be one only more signing this summer, he has targets for midfield. São Paulo’s Lucas Moura is thought to be one. Yet after the Brazilian club’s claim that United’s offer of €35m (£27.2m) is too low, an improved bid of more than £30m from Ferguson for an unproven 19-year-old appears unlikely.

If Van Persie does end up at Old Trafford, the money in the transfer kitty left available to Ferguson means he may have to produce the unexpected and be savvy. As with Laurent Blanc, Henrik Larsson and Michael Owen, Ferguson has shown over the years his liking for the counter-instinctive, left-field signing and he may well have another incoming before the transfer window slams shut.

Otherwise the hope for United fans is that if Van Persie proves the end of United’s business in this window, his acquisition proves to be more of a Larsson than a Juan Verón, Kleberson or David Bellion.

Van Persie has become the complete striker, and at 29 years old he is hitting his peak as a footballer, 37 goals last season emphasises how formidable he has become. At a reasonable price in modern day terms for a proven goalscorer at £20 million, Van Persie comes into the bargain category. This will represent our only chance to sign Van Persie, will Sir Alex want to pass up this fantastic opportunity and live to regret it when his dynasty is over?

Last season was a breakthrough campaign for local lad Danny Welbeck, but a rather mixed season for Chicharito. If Van Persie is signed, questions will be asked about their long-term futures at United, especially with Welbeck out of contract next summer. Would Ferguson want to risk having two discontented strikers in reserve watching the seemingly untouchable partnership of Rooney and Van Persie do their stuff? It would be a major hit to both to be overtaken in the pecking order, but Van Persie is a class above.

It will be interesting to see how the strikers and attacking midfield new boy Shinji Kagawa will be accomodated however it’s hard to believe that Sir Alex Ferguson would be in the race to sign Robin van Persie if he didn’t have a plan to give each player a sufficient amount of football as to not hinder their progress. The treble winning side of ’99 had 4 top-class striker vying for position and were rotated as best as possible to ensure they were at optimum fitness and well-rested for the onslaught on all fronts. Cole, Yorke, Sheringham and Solskjaer all got their chance and all took it. So why couldn’t Rooney, Van Persie, Welbeck and Hernandez?

As we lost the title last year so agonisingly on goal difference, some more beef up front wouldn’t go amiss, and despite our best goal tally since the inauguration of the Premier League, the prospect of more goals is mouthwatering. Ferguson’s public declaration of interest in the Dutchman indicates that he is willing to break the mould of not signing players over 26 policy, and Van Persie could prove to be a vital exception to Ferguson’s rule of thumb over transfers. The last marquee signing of kind in recent years was Dimitar Berbatov, if Van Persie were to join it would be a significant signal of intent on our part, that we are ready to reclaim our title and form an envious and formidable frontline.

United’s midfield has not been bolstered for 5 years now, our last central midfield additions were Anderson and Owen Hargreaves. Both have been ravaged by injury, Hargreaves is again looking for a club, and Anderson’s potential and early promise has not fully been realised, often proving to be an easy target to many fans. Tom Cleverley will be hoping for a more fruitful season after his breakthrough season was curtailed again by injury. With a worrying amount of youth players exiting the Old Trafford doors for whatever reason, growing our own fruit is proving more and more difficult, placing a particularly strenuous emphasis on scouring the market for potential recruits. With funds limited at the best of times, the addition of Van Persie would test the coffers when it comes to strengthening the midfield.

So where does the priority lie? Signing a world-class centre-forward who is available at a knockdown price and will guarantee a bucket load of goals? Or is finding a midfield general to fill the voids which will be vacated by Scholes and Giggs first on the ‘to do’ list?

One thing is for sure, we will soon know the answer, preferably before our 8pm at Goodison Park on August 20th.

4 responses to “RVP – The too good to miss gamble”