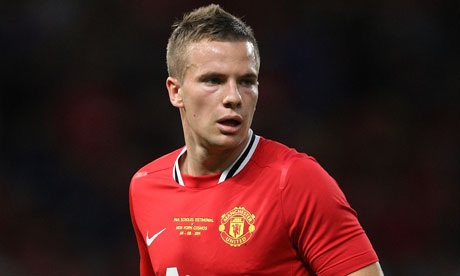 Tom Cleverley broke onto the scene last season after the retirement of Paul Scholes was confirmed. After spending time on-loan at clubs like Wigan Athletic, Watford and Leicester City, the 22-year-old picked up enough experience to be granted a chance as a Manchester United first team regular.

Manchester United’s midfield has been a topic of debate ever since Roy Keane left for Celtic in 2005. The prospect of a youngster breaking through filled supporters with excitement, and to be honest, after Cleverley’s first couple of performances alongside Anderson, you couldn’t blame those that got giddy.

Last year’s Community Shield against Manchester City stands out when you look at to highlights of Cleverley’s season. The second half (which featured Cleverley, who replaced Michael Carrick after United were down 2-0 at half time) displayed one of United’s best performances of the 2011/12 campaign. We got the ball down and moved it around brilliantly, breaking down Roberto Mancini’s defense. If that didn’t get you excited for the season ahead, nothing ever will.

Tom Cleverley made a total of 10 appearances last season. The homegrown youngster struggled with injuries and found it difficult to break back into the team once Paul Scholes came out of retirement. However, with a bit of hope, Cleverley will get a good start to the season and become more consistent.

So far at the Olympics this summer, Cleverley has played an important role in Team GB’s midfield alongside veteran Ryan Giggs. Great Britain topped Group A ahead of Senegal while Uruguay and UA Emirates failed to reach the knockout stages.

Cleverley has been praised for his impact in the team which mainly consists of Premier League footballers. His movement on and off the ball has been a pleasure to watch, not to mention his quick feet. Pundits and commentators have also commented on his willingness to receive possession in tight spaces, staying composed and using the ball intelligently.

I hope Cleverley can get his head down next season and prove his worth. He hasn’t done enough in the game to have a website or brand. Then again, I’ve never been a fan of that sort of thing but I guess it’s the way the game has gone. Cleverley has a long way to go before he can get away with all that jazz.