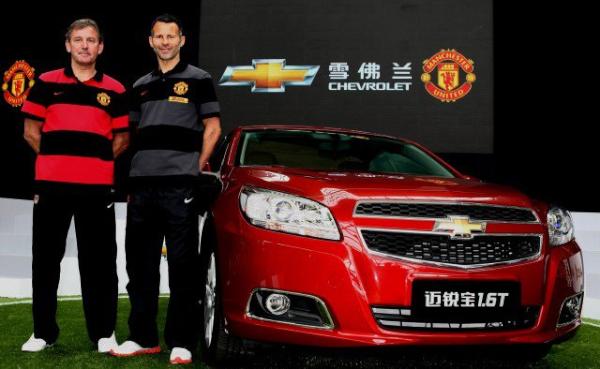 Manchester United have signed a seven-year deal making US car brand Chevrolet its next shirt sponsor, replacing insurance company Aon. The £25m-a-year deal will begin before the 2014-15 season.

The record deal looks down on the shirt sponsors Liverpool, Barcelona and Bayern Munich have, therefore, it should increase our income to some extent in the near future. This time last week fans were convinced the plan to list Manchester United on the New York Stock Exchange was scraped. Although, the Glazers changed their mind after making this announcement.

It hasn’t been said if Aon wanted to continue its shirt sponsorship deal with the club. However, their current deal is worth £20 million a season, which is still a larger sum than most clubs are used to.

It is believed Manchester United have been negotiating this move with Chevrolet ever since they agreed on a lower-tier deal as official car partner just weeks ago. The US car brand controversially signed a similar deal with Liverpool recently.

Ewanick was replaced by Alan Batey, who said: “We are extremely proud to connect our brand, Chevrolet, with Manchester United and its passionate supporters all around the world.

“Manchester United’s statistics are impressive, but this relationship goes far beyond the numbers – this relationship is about connecting our brand with the deep-seated emotion that surrounds the team everywhere it goes.”