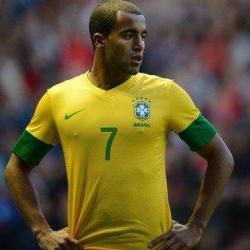 The Scot confirmed his interest in the 19-year-old winger in Shanghai on Monday, but denied claims that the two clubs had reached agreement over a £26million transfer.

Now the player’s agent, Wagner Ribeiro, has warned United they have little chance of prising the teenager away from South America unless they match Sao Paulo’s valuation, which is significantly higher.

Ribeiro told www.uol.com.br: “They have reached their limit, they will not offer anything more. He will not leave. He is happy in Sao Paulo. This matter has to be terminated, there is no possibility of him leaving now. Manchester United made an offer which was refused, and will not do another because they came up to their limit.”

Ferguson, who has already added midfielders Shinji Kagawa and Nick Powell to his squad this summer, admitted Lucas is among his remaining targets during the Reds’ pre-season trip to China.

He told the media: “We have shown an interest, but until such time a we get a deal agreed, we can’t say he’s our player.”