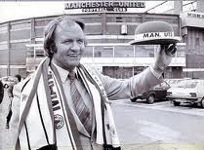 After succeeding Dave Sexton at Manchester United, Ron Atkinson won exactly half of his games in the Old Trafford hotseat.

A manager with charisma and sparkle, Atkinson brought a brand of football that had been missing in the past years – it was attractive and exciting.

Seen by many as a revolutionary, Atkinson spent 6 seasons at the helm, winning two FA Cups and reaching the semi finals of the European Cup Winners’ Cup. Although Atkinson’s team never quite managed to lift the First Division trophy, he is often forgiven, as Bob Paisley’s Liverpool were around at the time.

Atkinson, away from the pitch, spent big in the transfer market, shelling out £8 million for such talent as Bryan Robson and Gordon Strachan, along with blooding such youngsters as Mark Hughes and Norman Whiteside.

When Atkinson took over from the dour Dave Sexton at the Old Trafford helm, fortunes looked set to change. With Sexton only able to lead United to an eighth placed finish the season before, Atkinson took United into third place and the Uefa Cup in the 1981-82 season. Their European charge ended as soon as it had begun though, with United crashing out 2-1 on aggregate to Valencia in the first round. They lost by the same score in that season’s League Cup final to Liverpool, but managed to taste glory at Wembley with a 4-0 thrashing of Brighton and Hove Albion in their FA Cup final replay.

In the following league season United finished third again, behind Watford in second and Liverpool on top. Now though, there was a buzz around Old Trafford. With Bryan Robson and Frank Stapleton becoming stalwarts of the side, and Norman Whiteside making his breakthrough in the first team, Atkinson suddenly had the spine of a potentially brilliant side.
In 1983-84 United reached the semi finals of the European Cup Winners’ Cup but suffered a humiliating defeat in the FA Cup third round.

United begun the season with silverware after defeating Liverpool 2-0 in the Charity Shield and went onto finish fourth in the First Division, this time behind Nottingham Forest, Southampton and eventual champions Liverpool.

The Red Devils’ FA Cup hopes were dashed almost as soon as they began though, with a shock 2-0 defeat at the hands of third division Bournemouth. Their Cup Winners’ Cup campaign bore fruit though, and a run including a pulsating 3-2 aggregate win over Barcelona was ended by Italian giants Juventus in the Semi Finals – United going down 3-2 on aggregate.

The end of the season saw the departure of midfield fulcrum Ray Wilkins to AC Milan for £1.5 million, and instead of bringing a replacement in, Atkinson plumped to move Norman Whiteside from his usual striker position into midfield to fill the sizable Wilkins shaped hole.

Unfortunately for Atkinson, losing Wilkins proved a blow too huge to recover from, and United finished fourth in the First Division, with Everton lifting the trophy ahead of both Liverpool and Tottenham Hotspur. The Red Devils did manage to lift the FA Cup for a second time under Ron Atkinson though, beating Everton 1-0 in the final to deny the Merseyside club a famous double. They were, however, denied access to Europe as, following the Heysel stadium disaster, all English clubs were banned from continental competition for an indefinite period of time (eventually lasting five years.)

In their final season in Europe under Atkinson United reached the quarter finals of the Uefa Cup, where Hungarian side Videoton won 5-4 on penalties following a 1-1 aggregate draw, before going on to contest, and lose, the final against the mighty Real Madrid.

The season following started brightly, with United bouncing back from a 2-0 Charity Shield defeat to Everton to go 10 games unbeaten (winning every one of them), and they ended 1985 on top of the table. However a remarkable loss of form saw United finish the season in fourth, behind West Ham in third, Everton in second and Liverpool again in first. Having been knocked out of the FA Cup by West Ham, and the League Cup by Liverpool, United had no cup successes to fall back on, and doubts about the future of Ron Atkinson began to surface in the press.

Mark Hughes was then sold in the close season following United’s year of disappointment, to Barcelona, and Nottingham Forest’s striker Peter Davenport was signed for £570,000 as a replacement.

The signing of the ex-Forest man did not appease the fans however, and speculation began to mount that Alex Ferguson was being lined up by the United board to take over if and when Atkinson was sacked.

United began the 1986-87 season in disastrous fashion as well, going four games without registering a win in the league, before a 5-1 thrashing of Southampton appeared to signal an upturn in fortunes. However, it wasn’t to be and 3 defeats followed, against Watford, Everton and Chelsea, with a solitary Bryan Robson goal scored. A draw with Nottingham Forest and wins over Sheffield Wednesday and Luton Town gave Atkinson hope in the face of calls for his sacking, but after two 1-1 draws with Manchester City and Coventry, followed by 4-1 League Cup defeat (some might say revenge mission) at the hands of Southampton, Ron Atkinson was officially sacked on the 5th of November 1986, the day after his team’s humiliating drubbing.

Manchester United, on the other hand, have done just fine without him…