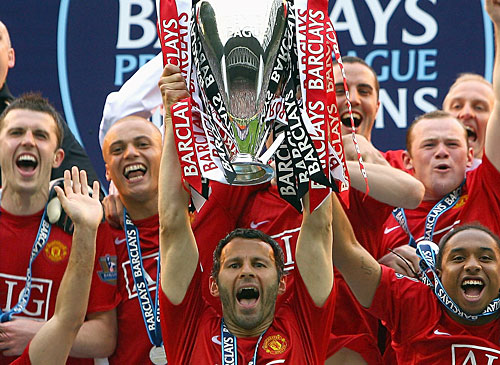 Yet the manner of last year’s crushing disappointment; two City goals in injury-time, the last of which came after the final whistle had gone on United’s season, has meant what lies ahead has never been far from Ferguson’s mind. So it was that, ahead of the first of six pre-season matches, against South African midtable outfit AmaZulu, Ferguson laid bare his vision for the next 10 months.

“After the disappointment of last year, we want to recover the title,” he said. “We either win the title or come second, it’s an important part of the history of our club over the last 20 years. We have to recover, as we’ve done many times. That’s our target this year. Priority number one is to win the title back.”

That proposition is easier said than done, with City once again preparing to spend big, possibly on Robin van Persie, with whom Ferguson has also been linked. United’s manager is not one to shirk a challenge though, as he has proved so often before.

“When Arsenal won the title from us in 1998 we won the Treble the next year,” Ferguson continued. “Then Chelsea came along and got off to a flyer in the league for the first two years, so we changed our pre-season a little to make sure we got off to quick starts. Recovery is so important and the same applies this season. Not that the preparation is going to be particularly easy.”

For the first half of a pre-season campaign that will see them fly 22,000 miles – on this leg United also have a game in Cape Town on Saturday before a 13-hour flight to Shanghai for a single game next Wednesday – Ferguson will be without all but Anders Lindegaard of his Euro 2012 contingent. After that, he will be missing Ryan Giggs, Tom Cleverley, David de Gea and Rafael who are about to try and win Olympic gold, knowing the final takes place on August 11, the same day as their club’s last friendly in Hannover. Somewhere into that schedule skipper Nemanja Vidic and Chris Smalling must be slotted after coming back from knee and groin injuries. Ferguson expects them to have recovered in time to face Everton at Goodison Park on August 20. However Northern Irish defender Jonny Evans is the least likely of the trio to make any of it as he battles back from ankle surgery.

Nevertheless, Ferguson believes Manchester United should be written off at their peril. “When I first started picking the young players, we played Port Vale in a League Cup game and an MP from Stoke protested to the government, saying we were cheating the public and they wanted their money back,” he said. “Little did she know she was watching perhaps the greatest group of young players to come through at a football club in England. The same applies here.”

2 responses to “Priority number one: Getting our title back”