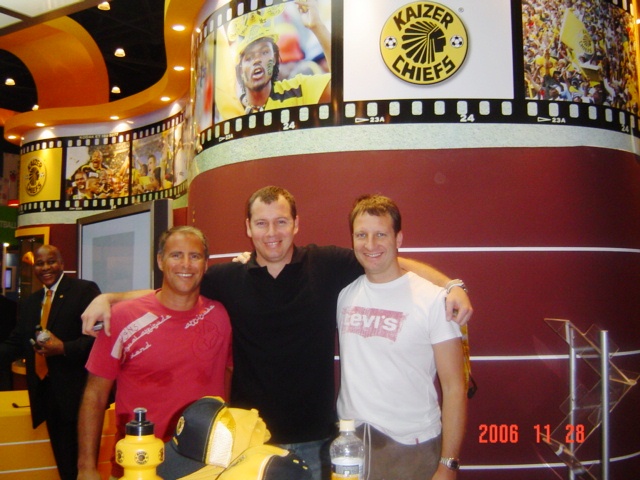 George Dearnaley is the man behind Amakhosi magazine. He is a lifelong Manchester United supporter, who took his chance to play professionally for AmaZulu FC and Bafana. He is one of many Reds living in South Africa that is excited about watching United kick off their pre-season tour.

What makes this interview that little bit more special is the fact Dearnaley was lucky enough to have a trial at United in December 1986 – a few months into Ferguson’s reign. He trained at the Cliff indoor centre where he spent time with Gary Walsh and Lee Sharpe, who had just signed from Torquay.

What does it mean for Usuthu to play against a club like Manchester United?

Fantastic opportunity for the players, playing against one of the most famous football teams in the world. It’s really an unbelievable opportunity and one I’m sure they are relishing – some of the players probably found it difficult to get some sleep last night with the excitement. I hope they do themselves proud and enjoy the experience. And if anyone wants to get me Paul Scholes’ jersey…

In your eyes, what do they have to do to get a result against United tonight?

Well, a ‘result’ might not be losing too much, or getting a draw! Both teams are undergoing their pre-season tours, and United have brought a full squad which includes a lot of youngsters who will be keen to impress Sir Alex. Usuthu will want to keep the ball as much as possible, and they will want to close United down in their building-up phase, not allowing them too much space to play. We can expect players on both sides to be rusty, not in the peak of physical condition, so I am not expecting a high technical quality. Usuthu will also use some new players, so they will be learning about their team-mates during a very high pressure match, but I don’t think Roger Palmgren and Fani Madida are expecting to win the match, and to be honest Sir Alex is probably hoping to have a good run out with no injuries.

Which United players do they feel the need to watch the most?

New signing Shinji Kagawa will be keen to start his United career off at a high level, so you can expect him to make things happen in the build-up and in the attacking phrase for United. Rio Ferdinand has had some personal issues to deal with, including missing out on the European Championships, so I am looking forward to watching him play and get himself focussed ahead of the upcoming season. Then you have the likes of Paul Scholes, Michael Carrick, Antonio Valencia, and Javier Hernandez, who are all experienced professionals. United will also give game time to some of the new crop, particularly youngsters. New signing Nick Powell and defender Scott Wooton, who will be keen to impress the boss, so I don’t think it will be a bunch of highly paid superstars walking around the pitch like we owe them a favour – they will be here to start their business, and they will be here to win their matches.

Which Usuthu players are you tipping to cause problems for United?

Actually, the key to Usuthu doing well against United, will be if every player understands that he has to play for the team, and has to do what is best for the team. If individual players think it is an opportunity for them to stand out and be noticed, they will try too hard and do things that are best for them, not the team. What we need is for the entire squad to focus on their basic tasks, to win their individual battles, to play within the coaches guidelines and to do what is best for the team. This doesn’t always get the attention of the journalists and the supporters, but the coach will appreciate if his individual players do a ‘team’ performance. Usuthu still lack a 20-goal striker (as do most PSL teams) but if the defence can do their job and if the midfield can close down United before they get within range, then it might be a close game. I like Ayanda Dlamini – he plays with great passion for the team – so I hope he scores one or two!

What is the atmosphere like since United arrived in South Africa?

Fantastic – United have an estimated 1 million supporters over here. Durban and Cape Town are the two biggest areas of support, so there is massive interest and the atmosphere in Durban today should be great. Tickets for the training sessions in both Durban and Cape Town were sold out in a few days. Match tickets, even though up to 10 x more expensive than our local match tickets, are sold out.

Tell us a bit more about AmaZulu FC and their manager.

The manager, Roger Palmgren, has done a great job making AmaZulu hard to beat in our domestic league. They had the best goals against record, but they were let down up front. They will run all day, they will really be up for this – the match also forms part of AmaZulu’s 80th Anniversary celebrations, so the players will put up a fight. My favourite is Ayanda Dlamini up front who is tireless, very passionate about his team and the supporters, but lacks the finesse and the tactical acumen to be a very good player. He’s solid if unspectacular. They have also made a few new signings who will need to adapt, and they are also in pre-season training, so there should be a lot of heavy legs after 60 mins, and I think you will see both teams making a lot of changes.

How did you become a Red after being raised in South Africa?

My dad’s family lived in Stalybridge and my uncle (Addy Dearnaley) has been a season ticket holder in the Stretford End since they started season tickets! So I was born a Red, 9 months exactly after the 1968 European Cup final, and being named George is all part of the family’s love affair with United. Bryan Robson was my first hero, and when I played professionally and even when I played up front for South Africa, I wore the number 7 jersey because of him.

What are you earliest of memories from supporting United?

We used to only get 1 English football match a year on our TV, and that was the FA Cup final – so my 1st match was the 1976 game, when Bobby Stokes was offside. Then 1977 v Liverpool and 1979 v Arsenal. When United equalised, my dad ran out the house celebrating! When he came back in we had lost! He didn’t know what had happened. I was crying. And then my 1st ‘live’ match was 30th November 1985 v Watford. I was stood in the Stretford End, I remember hanging on to the red railings for dear life. Alan Brazil scored and then Watford equalized in the last few mins, I was gutted.

What do you remember about your trial at United?

I had been spotted by a local scout who set me up with a trial at Hibs in Scotland when I was 16.  I travelled over to France with another South African who was going for a trial at United (Lenin Steenkamp). We stayed at my Uncle’s place in Stalybridge and because my trial at Hibs was arranged for the following week, I went along to the Cliff with Lenin, and my uncle convinced Sir Alex to let me train with the youth team. We had a few training drills, passing and controlling the ball on the indoor astro-turf (it was December), and then we had a small game – I was in the same team as Gary Walsh (I don’t remember the other kids’ names). Then we had a 5-a-side against the management – so I played against Sir Alex, Archie Knox, Brian Kidd and a few others. During the 5-a-side, I got absolutely hammered in a 50/50 with Archie Knox, I think I did a cartwheel and landed on my backside. Someone told him to take it easy on me and I guess because I was tall he said something about ‘handling the tackles and learning to pass the ball quicker!’. I was only 16, so it was a very quick learning curve. Later we went back to the digs where Lenin was staying and Lee Sharpe was there. I asked him for a pen so I could write down the contact details for Lenin, but Sharpey thought I was asking him for a ‘pin’. He brought me a drawing pin.

You seem to be doing a lot of work in the media at the moment. Tell us a bit about that?

I was badly injured in 1995 with a dislocated knee and torn ligaments, out for 16 months, so when I started playing again I was offered a contract at a 2nd Division team and part of the package was to also work for the club owner’s media business selling advertising on the local football magazine Kick Off. That was in 1997 and I have been involved in publishing, advertising and sponsorship since then. I currently publish the offical Kaizer Chiefs magazine, and am involved in a few other local football media platforms. Very useful contacts in the local football business world – I just got invited by Nike to the Global launch of the new United away jersey this Friday.

What’s football culture like on match days in South Africa?

The local football scene is very much like Scotland actually, well before Rangers were relegated to the 3rd Division. We have two massive clubs, Orlando Pirates and Kaizer Chiefs, and then the rest. So match day involving Chiefs and Pirates is massive – they have about 25 million supporters between them, but the other teams don’t really draw massive crowds. We also don’t segregate fans on match day – you can have Chiefs and Pirates fans sitting next to each other on derby day. We have a few incidents with someone getting a smack but nothing organised and violent compared to what goes on in Europe.  We’ve had too much violence over here to let it ruin our football.

But football is the biggest supported sport by miles, the only problem is that our National cricket and rugby teams are always ranked in the top 3 in the World and our football team can’t get into the top 50.