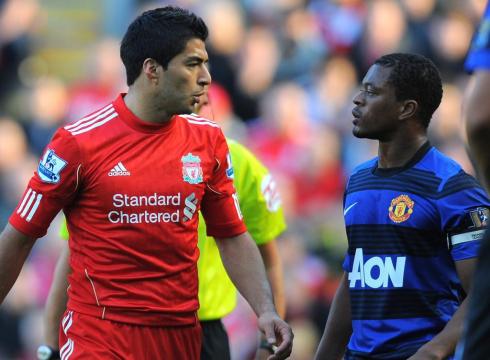 Luis Suarez has re-opened the race row again, despite being ordered by Liverpool’s representatives not to discuss it.

The Uruguayan admitted to calling Patrice Evra a “negro” during last season’s fixture between Manchester United and Liverpool at Anfield. Throughout the game Suarez and Evra argued constantly which lead to the Liverpool striker losing the plot. Not only did Suarez kick and punch Evra, but he slapped him around the head also.

After being reported to the FA for racially abusing Evra, Suarez argued that he was calling the United left-back a “negro” in a friendly manner, just like he would call his black friends back in his homeland. Once found guilty, Suarez picked up an 8 match ban and a fine worth £40,000.

However, speaking to Uruguayan TV he accused Manchester United of wielding their political power to get him suspended and fined. “Manchester United command the politics of sports in England,” said Suarez. “You have to accept, there’s no option.”

That wasn’t the only issue Suarez spoke about during his television appearance. He claimed: A) United are the political power in the Premier League. B) The Reds did all they could to get him banned. C) He was the victim in the handshake incident. All Evra’s fault. D) His wife and himself were reduced to tears by the ordeal. E) United fans offered him respect.

Reaction to each point expressed by Luis Suarez

A.  Ridiculous claim to make, especially after admitting to calling Evra a “negro.” If Suarez could expand on why he believes this, it might make it easier to argue with but no, he just feels hard done-by. The FA didn’t have any other choice. Racism is not acceptable.

B. Heh, typical Liverpool. Blame everyone but themselves. Maybe, Suarez, if you kept your mouth shut and controlled yourself better on the pitch you wouldn’t have gotten into this situation. Suarez didn’t listen though. Fenway Sports Group told Liverpool FC to stop showing the club up because they finally realised what damage Dalglish and Suarez were doing to the club. He ignored that, unsurprisingly.

C. Like I said above, typical Liverpool. Always the victim, it’s never your fault.

E. Excuse me, what?! United fans never offered Suarez respect. To play as the victim after racially abusing someone is beyond pathetic. (Video of United fans showing Suarez “respect” below.)

It will be interesting to see what Brendan Rodgers makes of this. Suarez no longer has Dalglish to go to whenever he feels the need to “cry” over shocking excuses that don’t work.