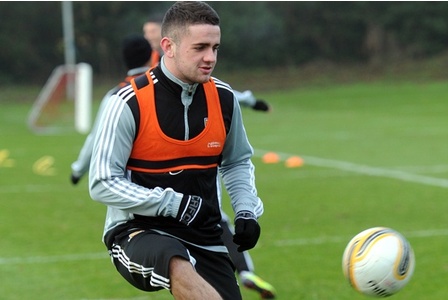 Robbie Brady, the currently crowned Ireland U-21 Player of the Year award winner, has spent last term on loan at Hull City applying his craft and improving his all round game. He hasn’t had the greatest statistical season only scoring three times in 41 appearances, but when it comes to putting on the green Robbie has scored five times for Ireland’s U-21’s.

Brady is considered the next Irish great by some, parent club Manchester United and the captain of U21 Ireland side. Who wouldn’t want to hype him up especially Irish people, and follow the legacy of other great Irish United players Roy Keane, George Best, Denis Irwin, Norman Whiteside. The list goes on and on. But lets get back to reality, Robbie has an extraordinary long way to go to even be mention among those names above.

As I go over the future plans of Robbie Brady, we will break down some of the possibilities. Robbie could follow in the foot steps of David Beckham and Tom Cleverley, who spent time in the Championship gaining valuable first team football. And like Cleverley, he could play his way into the Premier League next season. There is no guarantee he will be fighting for a spot at Old Trafford next season, but just like Danny Welbeck and Tom Cleverley did two seasons ago for Sunderland and Wigan respectively, spending a whole year at those clubs has helped them evolved into better players.

Currently, Danny Welbeck starts up front alongside Wayne Rooney with both Javier Hernandez and Dimitar Berbatov below him in the pecking order. Tom Cleverley had a sensational start to his United career that included dazzling displays against City, Arsenal, Spurs and West Brom before he suffered ankle ligament damage at Bolton.

My theory a couple months ago was if Hull got promoted into the Premier League, the logical choice would have been for him to stay with them for another year. Since that didn’t happen, my second theory was if Hull didn’t gain promotion Sir Alex might extend a hand to Owen Coyle who in recent history has been excellent giving loan players playing time, like Daniel Sturridge, Jack Wilshere, and Ryo Miyaichi but Bolton got relegated. Therefore my ideal choice for him is Wigan. Roberto Martinez will give him the playing time he needs, just like he did with Cleverley and with the loss of Hugo Rodallega and possibly Victor Moses on his way to West Ham, it would make perfect sense for both sides.

Due to the competition being so tight at Old Trafford especially in the wide positions with Antonino Valencia, Nani and Ashley Young all contending for spots, a loan move looks more likely for the Irish youngster next season. Warren Joyce told the Evening Herald: “Robbie [Brady] and Josh [King] will definitely go out on loan again but at this time of year they have the chance to catch the manager’s eye.” He continued:  “They will feel they have a chance to go on the first-team tour and that leaves for South Africa and the Far East on July 17. They will get games and they will hope to show the manager how close they are to the first team.”

Robbie Brady has improved his all round game this term, he isn’t scoring as many goals as Hull fans would have liked, but his contribution off the ball has been excellent. His versatility is also a valuable asset to any club – can play down the left, the right, and also through the middle as a second striker.

However, it wasn’t all great  in January as Robbie was dropped from the starting eleven because he wasn’t tracking back or putting in a full shift. He still managed to regain his spot after coming on as a sub and showing that not only can he be sublime and creative, but that he also helps out in defense.