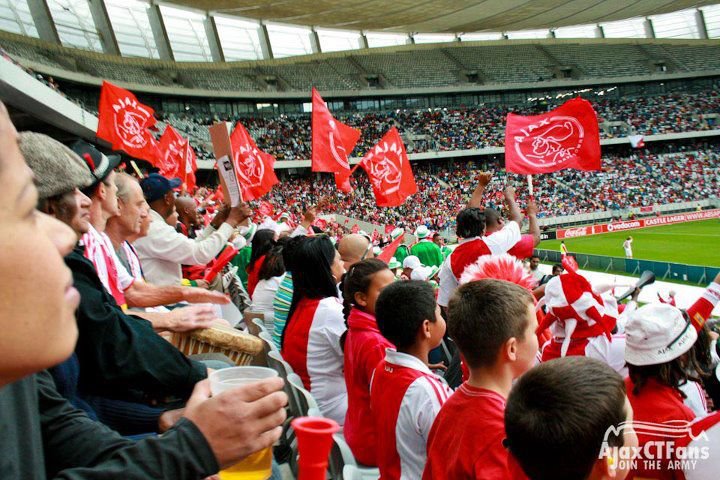 Manchester United arrive in Cape Town at a difficult time for their hosts Ajax Cape Town. The club were founded in 1999 following the amalgamation of Seven Stars and Cape Town Spurs and the incorporation of the world-wide Ajax Amsterdam talent feeder network to South Africa. After a decade of steady growth, which has seen the club establish itself as the leading club side in Cape Town, a bitter boardroom wrangle has subsequently damaged both on and off field progress.

The side that faces Manchester United on Saturday will not be as strong as local supporters would like, due to delays in re-signing established players and slow progress in bringing in badly needed reinforcements. After losing the South African PSL title on goal difference, in the final moments of the season two years ago, the club found itself sliding into the bottom half of the table last year, with its directors spending more and more valuable time in court.

Ajax Amsterdam own 51% of the club and are uneasily watching developments from across the water. The link with Amsterdam leads to many in South Africa being skeptical of the club, which is often viewed as an academy to feed its parent or other larger clubs. The reality is that although many players do travel from Cape Town to Amsterdam for trials, very few are chosen. The club therefore benefits from the ability to attract promising youngsters and provide them with a high quality training experience. When a genuine star is unearthed the loss is acceptable. This last happened, with Thulani Serero in 2011, who after an outstanding season in Cape Town moved to Ajax Amsterdam and actually featured for Ajax in the UEFA cup tie at Old Trafford last season. The club receives coaching and administrative assistance from Amsterdam and typically adopts a 4-3-3 formation, similar to Ajax Amsterdam.

The Dutch influence is strong with coach Maarten Stekelenberg (not that one!) having previously worked with the youth sides at Amsterdam and Cape Town. The football is fast and skillful, being a blend of European discipline and African flair, but the club has also picked up a reputation for poor discipline over the past season. Hopefully this should not be an issue in a pre-season fixture.

Manchester United supporters will recognize the traditional red and white Ajax strip which Ajax Cape Town play in and will also recognize the stadium, which hosted six World Cup 2010 fixtures, including the Holland v Uruguay semi-final. Ajax Cape Town have moved into the iconic new stadium but struggle to fill the seats in a city where most people follow other sports or the big English club sides such as Liverpool and United. Home fans will most likely be well outnumbered by Manchester United shirts on Saturday.

A familiar face to the visitors will be the Ajax goalkeeper, Sander Westerweld. The former Liverpool keeper was the clubs marquee signing last year but struggled to find consistent form and never really won the crowd over, after a popular local youngster was forced out to make way for him in the starting eleven. Other players for the visitors to be aware of include Khama Billiat – a tricky Zimbabwean international winger, who is usually the creator of Ajax’s most dangerous moments and the new forward signing of Bradley Grobler. Grobler is returning to South Africa after a spell in Turkey and has recently broken into the national squad, scoring his first international goal on his debut for South Africa last season.

Overall it’s a game that most people in Cape Town can not wait to see. Tickets sold out quickly and the match will be the biggest in the city since the 2010 World Cup. It’s a difficult call to predict a scoreline, in such an early season game but expect Ajax to give United a good workout in front of an appreciative crowd who will most likely be happy with any scoreline.

Paul Giess is originally from the UK but has lived in Cape Town for the past five years. He is part of the AjaxCTfans team that are attempting to keep the World Cup vibe alive in Cape Town’s local football scene. For further information on the group and Ajax Cape Town check out the website.