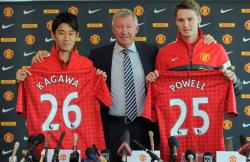 Sir Alex Ferguson has revealed that Manchester United’s summer spending may not be over. Speaking at the press conference today, the boss welcomed new signings Shinji Kagawa and Nick Powell to the media as they showed off their new squad numbers.

Japan international Kagawa, acquired from Borussia Dortmund after winning the German double, and former Crewe midfielder Powell answered questions from the press for the first time since joining United. Both players sound excited about getting started at their new club.

“I’m a member of a great club at Manchester United,” Kagawa told ManUtd.com. “It’s definitely the greatest challenge of my career and I hope to learn and improve every day. I think I can handle the pressure and am pretty confident I can adapt to the style of the Premier League. I definitely feel the attention of the media globally now.”

The 23-year-old made his name at Dortmund as an attacking playmaker where he made 49 appearances and scored 21 goals in two years. He helped the club win back-to-back Bundesliga titles.

However, United’s business this summer seems far from over. Ferguson admitted he was still working on bringing one, maybe two, new faces into his squad before the Premier League campagin kicks off.

“It’s possible we could bring one more signing in, maybe two more. But probably one,” Ferguson told reporters. “We’ve always done well in terms of getting players at the end of the season, instead of waiting all summer. In Kagawa’s case, there was a fair bit of negotiating and that kept going for weeks. As for Powell, we knew Dario Gradi (Crewe’s director of football) would help us do the deal quickly.”

The question most fans want answered is: Who’s the player Ferguson wants to sign next? Well, there has been lots of talk about Leighton Baines since January because it was believed that United tried to tie a deal together with Everton after we sold Darren Gibson.

Before United signed Nick Powell, Ferguson made sure with Dario Gradi that the youngster could play in midfield. While I’m as excited with Powell as I was with Phil Jones last summer, I would be somewhat disappointed if he is the only midfielder brought in.

Patrice Evra recently turned 31, therefore, I don’t think United can continue to rely on him making 35+ appearances each season. Last year he gradually looked more tired as the season went on which lead to criticism directed his way. There are other reasons to why I believe Ferguson is set to concentrate on bringing in another left back – lack of competition or backup for Evra,  and Fabio da Silva has joined QPR on a season-long loan.

Time will tell what Ferguson’s next move is. Although, I’m sure the tabloid press will make most of it until a signing is made with all their ‘exclusives’.