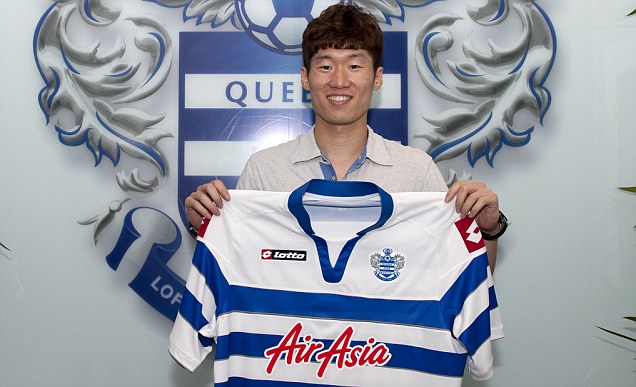 Ji-Sung Park’s five million pound to sale to QPR on Monday can be concluded as good business for both the selling club, and the buying. The aforementioned fee ensures that United have made a profit on a player who, at 31, is approaching the twilight of his career. Although the discreet Korean never exerted the same amount of influence as the likes of Ronaldo, Beckham, Cantona and other by-gone heroes, I believe his departure should have been complimented with more praise for his services than it was given.

As Dale (Editor of Stretty News) commented upon in his immediate report following Park’s departure – he was never a player who unified everyone in a belief that he was good enough to play for United. In runs of poor form it would often be Park, amongst others it must be said, that bore a large brunt of criticism – sometimes rightly and other times wrongly. It was often difficult to assess Park’s influence in a game, without solely focusing on him for the entirety of the match that is, given that he was often given specific roles to perform. These roles often indicated that he would touch the ball a meagre amount of times, which to some, propelled them into thinking that he’d had a poor – absent game.

Unfortunately, for the Korean, this image may have stuck with the minority of fans who ludicrously continue to see his marketing potential as the only reason for his original purchase. His, admittedly sporadic, performances last year will have done little to quell the perception that the aforementioned, ill-informed few still possess. As far as I see it, this could not be further from the truth. Park falls into the category of grossly underrated players to have pulled on the red shirt; as I have already stated, he was no flair player and, although he possessed a penchant for scoring pivotal goals on the big occasion, you couldn’t class him as an archetypal ‘match-winner’. Still, this did not diminish Park’s influence on the Manchester United side during his tenure at Old Trafford. The former South Korean captain, darling of his nation, was one of the most tactically astute players that I have watched in my time as a match-goer. He may have given the impression that he was no more than a headless chicken; running around in a foray of unprincipled ball chasing, but this perception was mere fallacy.

Park was a disciplined and adherent member of the United midfield contingent, not the most technically gifted of players or particularly pretty to watch, but he would never shirk his responsibility. His relentless shadowing of Andrea Pirlo at the San Siro in 2010, utterly nullifying the influence of one of the most technically gifted playmakers in the modern game, was as brutal as it was discreet. Some would scoff, labelling it anti-football; however, Park did not display an array of wild tackles to shackle the Italian maestro. Park was always ahead of the game, positioning was all but key, and he ensured that he was able to cover all available channels; thus preventing a strong supply line to Pirlo being assembled by the Rossoneri. Metaphorically speaking, Park had gagged and bound the conductor, leaving the orchestra to stumble on – out of tune and out of time.

It is a safe assumption to state that Park’s influence began to wane in his final season; the lack of games due to an abysmal cup run ensured that the most Ji was awarded was place on the bench at most. At thirty-one, it is likely that we will have seen the best of the likeable Korean, which is why I, as many other reds, see this as shrewd business. Still, Park will be missed at Old Trafford, he was a ‘Ferguson player’, hard working, not sycophantic but obedient; above all, it was his conduct off the pitch that will have most pleased Ferguson. Never one to occupy column inches, save for the back pages, he was media wary, yet media savvy. It is often overlooked that Park’s standing in his home nation of South Korea is akin to David Beckham – the native media interest is staggering and a lot to deal with for a man as unassuming as Park.

During my time on work-experience for the club website, I met Park in the aftermath of club sponsor press conference. The sponsor was Singha Beer and had subsequently brought in a deluge of stunningly beautiful Asian girls in cat suits holding trays of beer. Part of me thought it a little excessive, the other part thought I had died and gone to heaven – anyway, I digress. I found myself sat with Park once the conference had reached its conclusion, I asked him what he thought about events such as the one we were attending; he professed to enjoying them, but that he’d much rather be able to scuttle back home to be with his family or, Park gestured to the pitch, “out playing there”. This was not an interview and was completely off the record, thus discounting any notion of a contrived, pre-rehearsed answer. He was clearly proud to be representing the club in any capacity, but had his own values that suited those of Ferguson, who (and he often did) Park would have run through walls for. In the brief time I spoke with him Park was affable, friendly and made a nervous work-ex student feel at ease as he asked me if I was enjoying my time at United. It was a refreshing experience, given the amount of negative-press that football players receive – this being particularly potent given the on-going John Terry trial.

Park will always be remembered fondly amongst United fans, if not for his talent, then for his figure as a cult-hero (Three-Lung Park, Ji-Force yada yada) and the odd winning goal against those undesirables from down the East-Lancs road! Fans might crave players who carry an abundance of natural talent and skill, but players such as Park are arguably equally integral to a championship tilt, but are so often overlooked. United may have made a profit on Park, but we will be poorer without him?