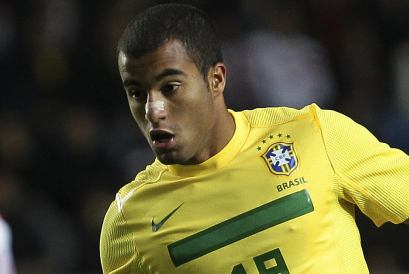 On Monday, The Sun understood interest from United for 19-year old Lucas Moura. The newspaper reported that the Brazillian youngster was ‘open to exit’, after the player revealed there was a  possibility that he could leave his current club this summer.

United were said to be ready to offer a £30 million bid for the talent.

But the Reds will have competition in the race for Lucas. Spanish giants Real Madrid are also pondering a move for him, and Inter Milan will be in the running for the player. Although, Sao Paulo director of football Joao Paulo de Jesus Lopes has poked fun at the Italian club’s interest.

“How can you pay £20 million for a player of Lucas’s quality?” Jesus Lopes told the Daily Mail. “There is no (formal) offer and, even if it were to appear, this amount is ridiculous. Italian football is broke – the club (Inter) are broke. It seems they are creating this to satisfy the fans.”

Reports say United sent a delegation to Brazil to persuade the player into signing at Old Trafford.

Moura will participate in the Olympics with his national team, and Sir Alex is said to be looking forward to signing the young promise before the tournament commences.

Meanwhile, Moura gave a hint to the connected teams: “I cannot guarantee that I will stay until the end of my contract [with Sao Paulo].” Players like Lucas are hard to find – fast, agile, great balance, superb passing accuracy, and beats defenders for run. Real potential.

Sao Paulo’s no. 7 has scored in 14 occasions, and has also contributed 9 assists in his 58 games in the Brazilian League. At 19 years of age, he has already participated in 15 international games with the senior team, but only scored once.

Contrary to popular belief, Lucas’ natural position is as a right attacking midfielder, not as a winger. Although, it is true that most, if not all, of his attacks start from the flank. He shines the most behind a striker, but is forced to play next to the sideline because of Sao Paulo’s 4-4-2 formation.

The only possible way that both the Brazilian and the Japanese could play together is if Sir Alex decided to play a 4-3-2-1 with two attacking midfielders but no wingers, which is something that won’t happen under Fergie.

Moura plays as an attacking midfielder, but as previously mentioned, he is used, and can, play as a winger. If he were to sign, another alternative would be to keep the likeable 4-2-3-1 formation and see how he does on the sides with United.

One thing is certain, and that is that Ferguson will NOT move Valencia from the right, nor will he get rid of the attacks on the sides. Luckily for Lucas, he is very talented on both legs. That’s why my idea would be to keep Valencia on the right flank, keep Kagawa in the middle, and place the youngster on the left side.

When Robben, who is a lefty, played for Madrid, he was used on the left side of the pitch, but he couldn’t fully develop in that position. However, when he signed for Munich, coach Van Gaal decided to try the Dutch on the opposite side, and instead make him cut into the middle and take a powerful shot, a play which has now become Arjen’s signature move, if you will. The reason I mentioned this is because I think Ferguson could use the 15-capped International in this manner.

Like I said, Moura is more than capable of using both feet. Sir Alex Ferguson has always enjoyed having the wingers spread out – Ronaldo, Valencia or Nani are examples in recent years. The 19-year old could use his extraordinary skills to fool defenders and penetrate the defence, but he could also be a threat when cutting into the middle and taking his powerful shots.

It would be unfortunate to miss on such wonderfully gifted player and have another team take him. Of course, his signing could go both ways, as you cannot compare Brazilian defenders to the defenders in the Premier League, who are much more physical.

16 responses to “Gossip: Moura to United? Everything on Lucas and how he would fit into the team”