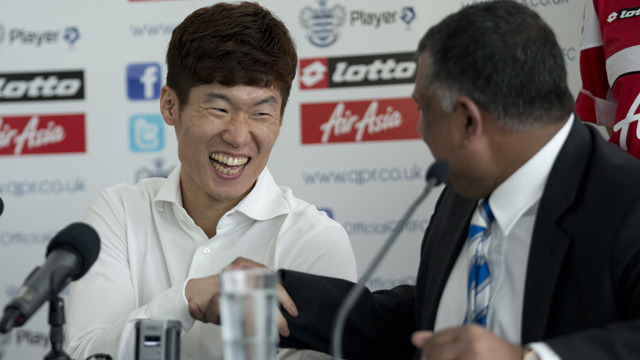 Ji-sung Park completed his move to Queens Park Rangers today as both clubs confirmed what we already expected to happen. He signed a two-year deal which will keep him at Loftus Road until 2014.

Park, who has split opinion amongst supporters since joining in 2005, said during today’s press conference: “My time at United will last in my heart for the rest of my life. It’s been a great privilege to be part of such a great team, to have won so much and to have played with special teammates and for the greatest manager in the game.” He went on to add: “I would like to thank everybody at the club who give their best every single day to put every player in the best condition to enjoy their football and achieve success. The fans have been fantastic to me and I will always remember them with great affection.”

When I say Ji-sung Park split opinion amongst United supporters, you have those that didn’t rate him at all and those that over exaggerated his capabilities. Park was a good squad player. When called upon, he usually did the job. However, the 31-year-old didn’t do much last season which gives me the impression that we’re moving him on at the right time.

Park had his fair share of good moments down the years. At Old Trafford he won 4 Premier League titles, 1 Champions League and an FIFA Club World Cup. United currently have two or three better players that are capable of filling the positions he did, so I don’t think there’s a real point in keeping a player just because he can run around a lot. If there’s anything that always stood out to Park, though, it’s his fantastic attitude. He never looked happy as such but always got his head down and got on with it.

The downside to Park leaving is the dependent-esque mentality he carried. Ferguson could always depend on the Korean in the majority of big games because he would work incredibly hard. Although with age, that attribute will more than likely run thin.

“He’s been a fantastic servant to the club over the past seven years,” said Ferguson. “He is the ultimate professional and such a nice lad; he never let us down on the big occasions. Unfortunately, I just couldn’t give him the number of games he wanted. Everyone at Manchester United wishes him well for the future and I am sure he will be a great success at QPR.”

Rio Ferdinand also had his say on Park leaving: “He’s a really good lad – after three or four years he really came out of his shell and was one of the lads, making a lot of jokes. I’m sad to see him go as he’s a really nice guy.”

For QPR I consider Park a magnificent signing. They are getting an experienced player, who has had a real taste of success in the past. And that for £5 million, only few will disagree, is good business for both clubs.