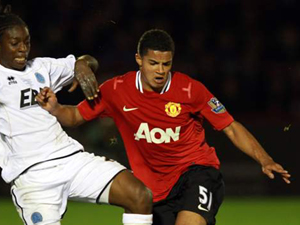 Manchester United defender Ezekiel Fryers has a agreed a deal with Tottenham Hotspur which is reported to be worth £20k per week.

On Friday Sky Sports told us Fryers is believed to have agreed a four-year deal at Spurs and is expected to finalise the move at the start of next week. We are also lead to believe United will receive £4 million for the defender which is great business on our behalf seeing he’s only made 2 starts for the first team.

During the 2010/11 season, when Fryers was a key part of our youth team, he suffered a serious knee injury that kept him out of most of the season, including the FA Youth Cup run which they went on to win. His senior debut for United came last season in the League Cup, starting alongside Michael Carrick at centre back. Since then he has come on as a substitute against Oțelul Galați in a Champions League replacing Jonny Evans.

Like every player that leaves United, there will be some supporters that, for some reason, will hold a grudge against Fryers. He was offered a contract before the season ended but decided to listen to offers elsewhere. I never thought he was going to become a first team regular with us, so maybe the move down south will be influenced by reality of getting more playing time at Spurs.