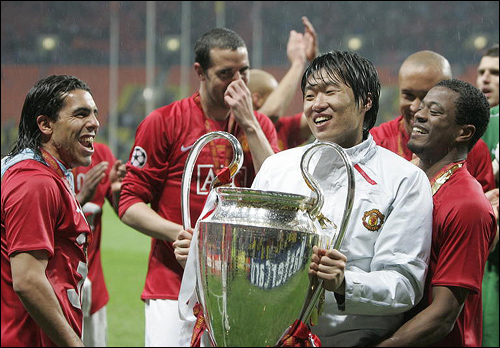 As Ji-sung Park completes the formalities before resurrecting his career at QPR, it speaks volumes of the man and how much he meant to United fans, worldwide and closer to home, with the amount of good luck messages and general feeling of disappointment that surrounds his exit. This send-off is completely justified, and he will be missed around Old Trafford.

Park made 205 appearances over 8 years in Red, scoring 27 times, often popping up with critical goals, which stand out in the memory over the course of a season. He was captain of his country for a vast period, until announcing his retirement from International duty, to solely focus his attention on domestic matters, and giving his all for United. Since joining in 2004, Park has won the Premier League four times and has also won the UEFA Champions League and the FIFA Club World Cup, not bad for someone who was not always a regular in the side.

I first watched Park in action when PSV took on Milan in the Champions League semi-final in 2004. He was sensational that night, keeping the virtuoso Andrea Pirlo quiet all game, even getting on the score sheet. On first glance, his key attributes were his boundless energy, an innate willingness to track back, and a serious appetite and application when it came to work-rate. Similar to Roy Keane, when he burst onto the United scene as a youngster, he was a box-to-box midfielder with an eye for goal.

It comes as no surprise that Sir Alex Ferguson elected Park as his ‘go to man’ when the big games came around. He was forever dependable, putting in some memorable performances in the Champions League particularly. He was the ideal player to have when going away from home in Europe, this could not be epitomised more than his display against Pirlo in his PSV days. Fergie has gone on record in the past to say that ‘it was one the hardest decisions’ he’s ever made to omit Park from the squad altogether that won so memorably in Moscow.

Park sums up the attitude and spirit that seems lost on so many of the modern generation, always giving 100%, whether it be in training or in front of 75,000, a genuine pride to wear the shirt, a hunger to succeed and never giving in regardless of any situation. Any fan takes to a player who shows these qualities. As much as we now loathe that Argie across the road, he was loved when he was with us as he showed hunger and was always committed. Apart from his sulks on the bench, something Park would never do, he was just happy to be part of United’s history.

Something that endeared Park to the United fans, was his uncanny knack to deliver when it mattered most. He usually saved his best for Chelsea, Liverpool and most notably Arsenal, who he always seemed to score a customary goal. He scored not only in a Champions League semi for PSV, but twice for us, against Arsenal and Chelsea, very important goal in both. His ability to shackle the opponent’s key player’s along the way made him an integral part of Fergie’s setup. Gary Neville often speaks of how Darren Fletcher was a ‘big-game player’, I would include Park in the same bracket. If we assess Park’s attributes, Fletcher is of similar ilk, hence their importance over the years, and shows how much Fletch is currently missed.

It was most unfortunate in the critical derby last season that Park was suddenly thrust into the side, after not starting since January. At the time, the decision shocked most. Looking back, it was the correct move in theory, due to his big game status. Park looked rusty, and obviously short of games, if Fergie had rotated a bit more with selection in the lead-up to the City clash, maybe Park could have secured us the draw we needed, maybe he would have reduced Yaya Toure et al to a reduced influence. Park was made the scapegoat in the post-match arguments across Manchester, but to be fair the negativity in the general approach was all too painful to watch.

Gauging general reaction to the sudden news that Park would be heading to London, it was agreed that, although he leaves with sadness, it is the right time for club and player to separate. We are bringing through more vibrancy and freshness in Kagawa and Powell, and seemingly selling the so-called ‘dead wood’. Park falls into that category, with the possible imminent departures of Anderson and Berba. It proved to be sound judgement by Fergie last year, by having a defensive car boot, which saw fan’s favourites Brown, O’Shea and before them Neville. Replacing such names with the young and eager duo of Smalling and Jones, which proved to be very astute business.

I do not want to dwell too much on last season, but one can only speculate if QPR already had the discipline and application that they are now buying into, instead of that Scouse rat, whether they would’ve held out for those awful last minutes.

So, as we reluctantly say goodbye to Park, all we can say is thanks for everything. His contribution will never be forgotten, so we’ll see Park at Old Trafford on November 24th, when we’ll be signing his name.

6 responses to “Park, Park wherever you may be…”