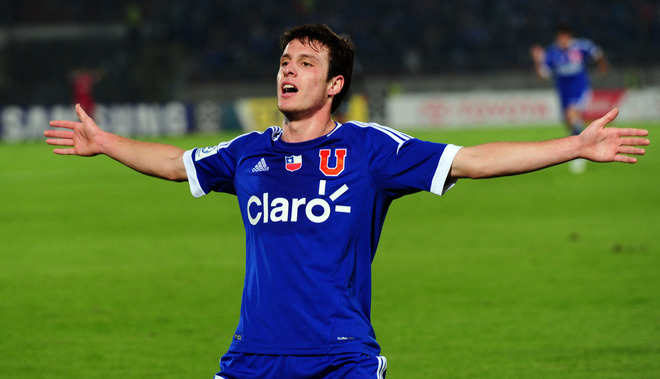 “I’m a fast and powerful striker. I’m a goalscorer who likes to play things simple”, was how 15-year old Ángelo Henríquez describes himself when interviewed by Chilean “La Tercera TV” in 2009. Back then, racing through the ranks of his maternal club of Universidad de Chile, he was invited over to England for trials with Manchester United. The deal was that Henríquez, along with Universidad de Católica starlet Pedro Salgado, was going to train with United twice a year in order to grow as players, and for the club to keep a watchful eye over the young Chilean prospects.

Henríquez would prove that United’s interest was a just as he went on to shine at the U-15 Copa America later that year, scoring two goals in the process. Two years later he’d shine on the international stage again, this time in the U-17 Copa America banging in goals against Colombia, Venezuela and champions-to-be, Brazil. As the summer progressed it became widespread news that Manchester United had decided to install a first refusal option in their deal with “La U” for Henríquez. A set fee of €5 millon (£3 millon) was agreed upon a five-year deal with La U. This meaning that United’s option for Henríquez would last until 2014. Henríquez himself had met with Sir Alex Ferguson and discussed the possibility of ever playing for United. Thoroughly informed, Henríquez told Chilean media that the mighty Scot had expressed his wish for him to have first team football in Chile under his belt before coming to England. This in order for Henríquez to develop in what he considered safe surroundings. However, Ferguson had made it crystal clear that he counted on him for the future.

When Jorge Sampaoli and Universidad de Chile lifted the Copa Sudamericana in late 2011 it effectively meant selling their most prized asset. After having ravelled through opposition in both domestic and continental football, Eduardo Vargas found himself head-hunted by top clubs across Europe including the likes of Chelsea. Eventually he signed with Napoli. Not only did Vargas leave, but club legend and cult hero Diego Rivarola decided to call it quits. The interesting part about Rivarola and Henríquez was that not only did they resemble in their style of play, but they also looked very similar. The fans played along with the moniker of Ángelo Henríquez being the heir to Rivarola’s throne and named him “Gohan”. Gohan is the son of Goku in the Japanese cartoon Dragon Ball Z. And who had the fans named Goku in the past? Diego Rivarola of course. To make the passing of the torch complete, Rivarola handed down his coveted number seven shirt to his young successor. A new era had begun.

Despite the fans’ cries for a replacement for striker Gustavo Canales, who left the club before the 2012 Apertura season could start, Jorge Sampaoli decided to put his faith in the then 17-year old Chilean prospect. Having built a team based on youth and hunger, no other striker in Chile fit the bill better than Henríquez. “Gohan” would repay his manager’s trust by netting in his continental debut against Argentine side Godoy Cruz in a 5-1-hammering. Later in the week, he would up the tally even further, banging two against Cobreloa in the Chilean league. The eagle had landed. To emphasise the importance of Ángelo Henríquez to Universidad de Chile we need to look no further than to the “Superclásico” against Colo Colo. The “Superclásico” is by far the biggest game in Chile. It’s the equivalent to Barcelona – Real Madrid or Boca Juniors – River Plate. In other words; it gets no bigger. The topic that spearheaded most discussion in Chile, obviously helped on by a few injuries to the squad, was “who will partner Ángelo Henríquez in the La U attack?” It was already a given that the teenager would play an intricate part in the biggest game in Chile. Universidad de Chile embarrassed their arch rival with an emphatic 5-0-result with Henríquez getting himself on the score sheet.

Ángelo Henríquez described himself best as a striker. He is pacey, strong as an ox, likes to play it simple and a classic goalscorer. In later interviews he revealed that his hero growing up was Arsenal legend Thierry Henry, though when seeing him play you may have opted to compare him to a certain Dutchman who made a habit of banging in goals at Old Trafford. Saying that Henríquez really does not have any weakness to his game would not be an understatement. Perhaps his youth and lack of experience are to be held in question, especially against experienced defenders whose understanding of the game is broader than his. Despite this, Henríquez possess the ability to finish with both feet, times his runs perfectly, is fearless, is a great header of the ball and does not mind tracking back when having lost the ball. The most impressive for me, however, is his ability to lead a line of his own. Sure, he’s had wingers coming in from both flanks, but when played as a lone striker he torments defences both domestically and continentally. Being a powerhouse, he easily muscles past defenders and beats them in the air with glee. It’s not often you come across a striker who, at such a young age, seems to have everything you want in a top striker. Angelo Henríquez, however, is an exception to the rule.

He also stated that his sudden claim to fame wasn’t really something he worried about. Being guided by friends and family to not let the clutches of stardom convey him to the proverbial “other side” where so many super talents before him have gotten lost in the mix. “I think I’ve handled myself well. I haven’t gone crazy and my family are keeping my feet planted to the ground.” Henríquez did, however, admit to his dream being elsewhere than in Chile. “I want to play in Europe, but for now I’m here at La U. When the time comes for us to part ways, we’ll handle it then.” Furthermore, he was asked specifically about the club that had spotted him at 15. “The chance of going to England is there and I would like that very much. However, there’s no concrete offer on the table and therefore I really don’t think too much about it.” The general consensus is seemingly that it’s just a matter of time before Henríquez packs his bags and leaves the South-American continent. Having being crowned champion of Chile and losing out to Boca Juniors in the Copa Libertadores semi final, he fulfils the criterias asked of him by Sir Alex three years ago. If we take into account that Will Keane will not be on the mend for nine months, the path may be cleared on Henríquez’ way to the “Theatre of Dreams”.

The concern I have for him personally is that I believe it’s too soon. Lest we forget that this is his first season playing regular first team football. This being in his home town of Santiago, Chile for the most part. He just turned 18 and still has plenty of growing to do as a player, but also as a man. The Chileans remember how mega stars Iván Zamorano and Marcelo Salas didn’t leave the continent until they were 21 and 24 respectively. Besides, the experience he’s gaining as a regular first teamer is invaluable. It’s also experience he won’t be gaining any time soon at Manchester United with Wayne Rooney, Danny Welbeck and Chicharito all lined up ahead of him. He knows first hand that the intensity and the level of football in England is much higher than in Chile and probably wouldn’t be against staying for another year. In order to flourish on the bigger stages he needs to prove that he truly has conquered the one he’s performing at now. In my personal opinion, he needs at least one more season in order to do so.

One thing is for sure about Ángelo Henríquez; he will reach as far as he wants. The potential is present, he already knows he’s wanted at one of the world’s biggest clubs and he’s banging in goals left and right. If his name is called already this summer, he’ll to his utmost to make the best of it. A player with this sort of God given talent and work ethic just seems too good to waste away on a bench somewhere. To reflect, Henríquez’ travel companion in 2009, Pedro Salgado, plays second-tier football for Deportes Temuco, while Henríquez has the earth trembling at his gaze. In his early career, Henríquez had to make the choice of pursuing a career in tennis or football with his talent being apparent in both sports. We can only begin to imagine how happy he is with the choice he made.

8 responses to “Henríquez – The tale of a Chilean prodigy”