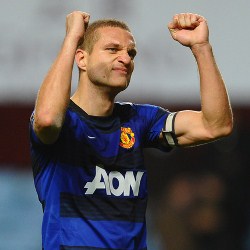 Following the summer captures of Shinji Kagawa and Nick Powell, United fans received yet more encouraging news ahead of the 2012/13 season. Our colossal skipper, Nemanja Vidic, will play some part in our pre-season matches to regain valuable match sharpness and re-unite with his colleagues. It will be a welcome sight for all United followers, and not least Sir Alex Ferguson.

Nemanja Vidic in unlike any other defender available to Fergie’s disposal. A definite throwback to previous eras, where defenders would innately risk life and limb to achieve the much sought-after clean sheet. Across the road, City can boast of having Vincent Kompany in their ranks, possessing similar qualities to Vidic, there can be no qualms in the claim that these two are the best in the Premier League and arguably on the world stage. It is no surprise, that both have the armband for their clubs.

Take a moment to evaluate the other defenders at United. There is no-one of Vidic’s ilk, which is precisely why Vidic is indispensable and should walk back into our defence, once his fitness have been proved. Ignoring the full-backs, think of Rio and Smalling… Both are of the ball-playing, modern variety. The same applies to Jonny Evans, comfortable on the ball but not afraid to compete in the physical battles. Nemanja is an out-and-out defender, with the sole objective of keeping out the ball. It was stated, even by Alan Hansen, that Rio and Nemanja formed one of the best Premier League defensive partnerships, and their complimenting of each other resulted in a uniquely obdurate defensive barrier, recognised by many in the game.

In a weird way, Vidic’s injury last season could be a blessing for United in the long-term. The ball-playing and purely defence minded combo of Ferdinand and Vidic cannot last forever. Rio is now on the wrong side of 30, and despite adapting his game accordingly and arguably having his best season in Red last year, one can only speculate how much is left in the tank. Last year was definitely make or break for Jonny Evans. He went on record to say he would be finished if his promise went to waste last year. And after the red card in the Derby, let’s be honest, he was all but done at United. Sir Alex has not made too many cock-ups during his time with United, many of still of the opinion though that it was a grave error to send Gerard Pique back to Barcelona, Evans is out to put that right, the man Fergie retained faith in.

Jonny Evans has arguably been United’s most improved player, only Patrice Evra and Rio Ferdinand appeared in the back 4 more times than the Belfast man in the 2011/12 season, he also broke his duck against Wolves, and looked like the player who first burst onto the scene. Fergie claimed last season, Evans’ renaissance was so remarkable that ‘he was the best defender in the country’. There may be slight hyperbole here, but in fact it was classic Ferguson’s man-management of a younger player, which gave Evans the confidence to put in exemplary performances of the highest calibre. Evans credited his rise in form, to ‘getting the basics right’. And that is all he needs to do with Nemanja returning to fitness.

Feasibly in a couple of years, when Rio will have presumably called it a day, it will be up to Evans, the eldest of the defensive trio of himself, Smalling and Jones, to form a partnership with Vidic. The return of Vidic next season, will surely inspire the defensive fledglings beside him, to churn out performances and enhance their already burgeoning reputation as defenders to look out for in the future. They will be the bedrock of the United defence for conceivably another decade. There is much to look forward to. In the meantime, welcome back captain.

2 responses to “The importance of having Vidic back”