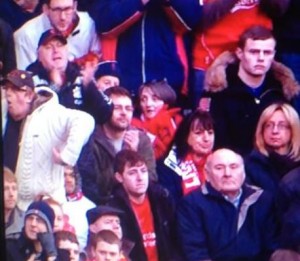 A Liverpool supporter has been handed a four-year ban for making a racist gesture towards Patrice Evra during the FA Cup fourth round clash at Anfield in January 2012.

The fan charged with racist abuse Phillip Gannon, a father of five from Wales, was identified with the help of television footage showing him perform a “monkey arms” gesture. Liverpool fans already did enough to disgrace themselves on that day by booing Evra and hurling abuse at him throughout the entire game.

Images and footage of Gannon circulated on Twitter, and Stretty News amongst others sent complaints regarding his actions to the police. We made it clear that people who act in this manner should never be allowed into a football stadium again. However Gannon, I’m sure, feels rather lucky with it just being a four-year ban.

Gannon idiotically claimed he was impersonating a Neanderthal and pleaded not guilty to a racially aggravated public order offence and using threatening or anti-social behaviour causing harassment, alarm or distress. How very Liverpool like, eh? Always the victim, it’s never their fault…

However, after a two-day trial at Liverpool Magistrates Court, he was convicted of the offense. The prosecutor, Rob Girvan, said: “This gesture was caught on camera and it was seen globally not just nationally. There was a volatile and tense atmosphere at the game because of a player on the pitch who said he was a victim of racial abuse. The defendant saying he was impersonating a Neanderthal is just a childish excuse to cover up what he did. It was clearly a racist gesture.”

As a result, Gannon cannot attend Liverpool matches for a four-year period. The ban also means he cannot be in Liverpool city centre four hours before and after a match. The former carpenter was also fined a total of £180 and ordered to pay prosecution costs of £300.